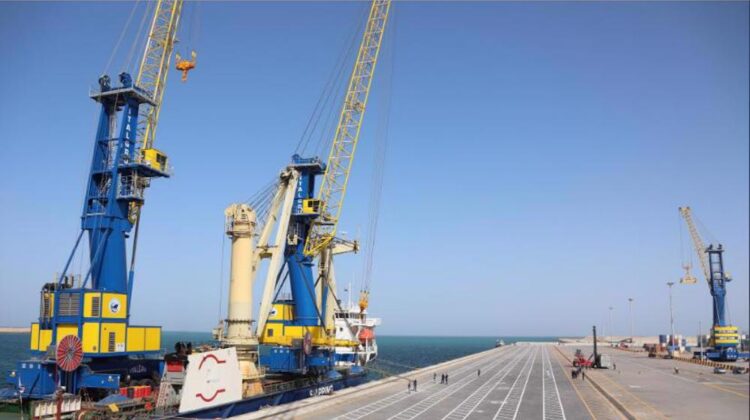 CHABAHAR / NEW DElHi : The second batch of equipment supplied by India has reached Chabahar, Iranian and Indian officials say, bringing New Delhi closer to full operation of the two terminals which it is developing in the port.

India has been developing a part of Chabahar on Iran’s southeastern coast along the Gulf of Oman in order to expand trade with Iran, Afghanistan and Central Asian nations.

Two Mobile Harbor Cranes (MHC), each weighing 100 tonnes, arrived in the port Sunday, more than a month after the first consignment of two 140-tonne MHCs was supplied.

Two more rail-mounted cranes will be delivered in the next few weeks. The six cranes have been built by Italian firm Italgru under a $25 million contract signed last year.

India had initially awarded the contract to Shanghai Zhenhua Heavy Industries, but the country cancelled it last year because of delays by the Chinese company in supplying the equipment ordered in 2017.

Under a trilateral contract signed with Iran and Afghanistan in May 2016, India is developing two berths at the Shahid Beheshti port of Chabahar with a total capital investment of $85 million and will operate them on a 10-year lease.

Indian officials expect to start full-scale operations at the terminals by the end of May. Earlier this month, Mandaviya said he expected to visit Iran in April or May for the inauguration of full operations.

The port commenced operations on a limited scale in December 2017. Last year, India used Chabahar to send 75,000 tonnes of wheat to Afghanistan and 25 tonnes of malathion pesticide to Iran to deal with a locust invasion.

According to the Indian minister, the port had handled 123 vessels and 1.8 million tonnes of bulk and general cargoes since February 2019.

“This is much higher than our expectations. Imagine the scale of operations and freight saving once it is fully operational,” he was quoted as saying this month.

Why is it so important to India?

India sees Chabahar as a stepping stone in its bid to become a regional infrastructure developer and expand trade with Afghanistan and other Central Asian states as well as the region beyond.

It has pledged to invest another $500 million in developing a free trade zone (FTZ) around Chabahar and build a $1.6 billion railway line some 600 km away to Zahedan, an Iranian city near the border of southwest Afghanistan.

Recently, New Delhi has proposed that Chabahar be included in the International North South Transport Corridor (INSTC), connecting Mumbai to Moscow through Iran.

The 7,200-km multimode route was proposed by Russia, Iran and India in 2000, before being joined by 10 Central Asian countries. It envisages a network of ship, rail and road for freight transport that will cut carriage costs by about 30-60% and transit time from 40 days to about 20 days.

Hence, Chabahar is thought to play a crucial role in reducing dependency on the Suez Canal for transporting cargo to Europe.

Under the 2017 tripartite agreement, India has committed at least $21 billion to the corridor linking Chabahar to Hajigak in central Afghanistan where the rising economic power plans to plough $11 billion into an iron and steel mining project.

Dating back to 2500 BC and first mentioned as the port of Tis during the invasion of Persia by Alexander of Macedon, Chabahar currently consists of two ports of Shahid Kalantari and Shahid Beheshti, each having five berths.

With the former being a traffic port, the Shahid Beheshti is being developed as a regional hub port. Since 2017, its capacity has expanded from 2 million tonnes per year to 8 million tonnes and is expected to hit 20 million tonnes once all development work is complete.

Under the May 2016 deal, India is refurbishing one of the berths at the Shahid Beheshti, and building a container handling facility at the port.

Iran currently relies on its port of Bandar Abbas on the Persian Gulf for 85% of its seaborne trade. Bandar Abbas is not a deep water port and cannot handle 250,000-tonne oceangoing cargo ships, making Iran dependent on UAE ports where such vessels dock for transfer of cargoes to smaller ships for onward shipment to Iran. This means a loss of revenue and provides a chokehold during the times of sanctions and political standoffs.

The desire to develop Chabahar in spite of enormous challenges indicates the recognition in both Iran and India of the crucial role which the project plays in their strategic priorities.https://if-cdn.com/wlvJVFJ?v=1&app=1

India views China’s attempt to redraw regional boundaries through its trillion-dollar Belt and Road Initiative with suspicion and tries to enhance its own regional connectivity profiles.

Iran, in contrast, has signaled its full dedication to the initiative which it sees as central to its bid to become a transport hub in the heart of Eurasia.

China is the largest foreign investor in Iran, having successfully completed a number of infrastructure projects in Iran including the Tehran metro. It is further providing $1.5 billion for the electrification of the Tehran-Mashhad railway line.

In 2016, the two countries announced their willingness to expand bilateral trade to $600 billion. Such an evolving closeness does not sit well with India which sees China as a rival.

Iran’s openness to Pakistani and Chinese participation in the development of Chabahar has also vexed India.

Moreover, India’s efforts to get a special concession for development of Farzad-B gas field in the Persian Gulf have hit a brick wall, which has bedeviled investment plans.

Another detractor is the challenge which India has been facing in acquiring heavy equipment from foreign countries, mainly because of the reluctance of foreign banks to open letters of credit for a project in Iran, despite Chabahar port being granted a waiver from US sanctions on the Islamic Republic.

Against so many odds, India’s completion of the project represents a key geoeconomic victory for Iran, which is likely to encourage other investors to abandon their qualms and engage the Islamic Republic in trade.