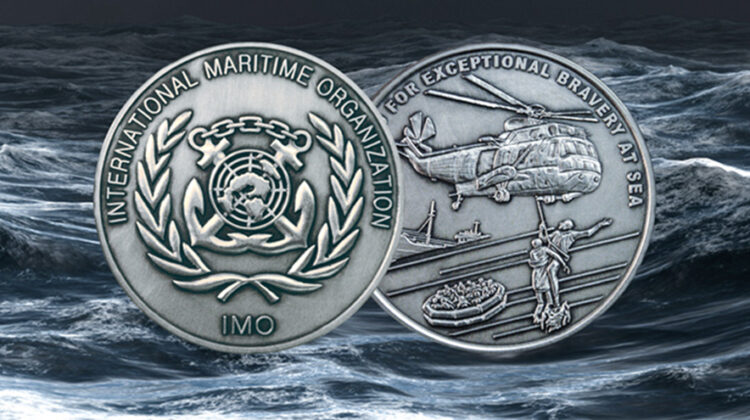 Mr. Tran Van Khoi, Search and Rescue Officer from Viet Nam, will receive the award for rescuing four survivors from a sunken vessel.

A search and rescue officer from Viet Nam has been selected to receive the 2021 IMO Award for Exceptional Bravery at Sea, after saving the lives of four people from a sunken cargo ship in extreme weather and heavy seas.

The recipients were selected by a Panel of Judges, whose recommendation was endorsed by the IMO Council, meeting remotely for its 125th session from 28 June to 2 July.

The 2021 IMO Award for Exceptional Bravery at Sea will be awarded to Mr. Tran Van Khoi, Search and Rescue Officer.

He was nominated for his courageous actions and tireless rescue attempts in a rescue operation that lasted over three days, in October 2020.

The incident began on 8 October 2020, when the cargo vessel Vietship 01 was swept away as it was docking at the Cua Viet Port, due to widespread flooding and wind gusts of 74 km/h caused by typhoon Linfa. The vessel sank in shallow waters, leaving its 12 crew members trapped onboard, gathering on the roof of the cabin. Several rescue units were immediately deployed, but a rescue plan was not viable due to the severe weather and sea conditions.

On the early morning of 9 October, Mr. Khoi was on shore watch duty. He witnessed two crew members being washed off by strong waves into the sea. Without hesitation, he tied a rope to his body and swam through five-meter waves and strong currents, rescuing both. In the afternoon, two more crew members fell into the water and were fortunately tossed ashore by the waves. In deteriorating weather on 10 October, a fishing vessel tried to approach the Vietship 01 but sank before it could reach it. One fisher was swept ashore by rough waves but three more had to climb the Vietship 01 for safety.

On the afternoon of 10 October, Mr. Khoi volunteered to try a new approach on another fishing vessel, intending to connect the sunken ship to the shore using guns that shoot wires. Rough sea conditions prevented the rescue attempt and two crew members jumped into the water. Mr. Khoi risked his life again, swimming amidst raging waves to help them board the sunken fishing vessel. Later in the afternoon, severely exhausted after two days, Mr. Khoi volunteered to steer a rib coach boat against the fierce seas. The boat nearly overturned after its engine stopped working due to significant flooding. Mr. Khoi and his crew quickly fixed the engine problem and continued trying to approach the Vietship 01 to no avail. They were exhausted, it was dark and they were ordered to return to the shore. The final act of the rescue operation took place on 11 October 2020, after rescue helicopters were deployed to the scene and the rest of survivors were hoisted to safety.

The Council agreed to award certificates of commendation to:

2.     The members of the diving rescue team of Guangzhou Rescue Base, Nan Hai Rescue Bureau, nominated by China, for their courage and diligence displayed in the underwater search and rescue operation of nine crew members of the capsized, bulk cargo carrier Hongxiang 819. They managed to rescue the only survivor, who had been trapped for 20 hours in a cargo hold, and recovered the remains of four casualties.

3.     Mr. Anton Muradyants, Mr. Gambik Asaturyan, Mr. Denis Nikolenko, Mr. Kirill Vikulov and Mr. Konstantin Kendigilyan, members of the Marine Rescue Service, Azovo-Chernomorsky Branch, nominated by the Russian Federation, for remarkable courage and tenacity displayed during the emergency operation onboard theM/V April, which was flooding while carrying dangerous cargo. They evacuated crew and a casualty, who had sadly died due to poisoning, performed emergency works and prevented the sinking of the M/V April and spillage of tons of harmful chemicals into the sea.

4.     The members of the DEGAK-20 diving safety, security, search and rescue team, Turkish Coast Guard Command, nominated by Turkey, for their courage in the rescue of the crew of the capsized fishing boat Kumsal 55. After rescuing 10 survivors and locating and bringing to the surface an unconscious crew member, they rescued, in complete darkness and very dangerous underwater conditions, a trapped crew member and also recovered the remains of a casualty.

5.     Aviation Survival Technician First Class Joshua K. Mayfield, Coast Guard Air Station Elizabeth City, NC, United States Coast Guard, nominated by the United States, for his exceptional bravery and endurance during the challenging rescue, of two mariners from a sailing vessel which had lost power. AST1 Mayfield spent 60 minutes in frigid waters, swimming constantly through tumultuous seas to keep the survivors afloat and lift them into the swinging rescue basket to be hoisted to safety.

6.     Petty Officer First Class Wallace Qual, Coast Guard Station Yaquina Bay, United States Coast Guard, nominated by the United States, for his remarkable courage, initiative and fortitude in the rescue operation of the master of the sinking vessel Legend after all other rescue options were discarded due to extreme conditions caused by local wildfires and the vessel’s proximity to the surf zone.

8.     Rescuers involved in the M/T New Diamond, which caught fire and was drifting towards the coast laden with dangerous cargo. Specifically, the rescue team members of the Indian Navy and the Indian Coast Guard and the Master and crew of the tugboat Ocean Bliss, nominated by India, who skillfully towed the vessel away from the coast, brought the vessel under control and carried out effective firefighting, preventing a serious marine pollution incident; and Commander KRGRS Rantenna, psc, Lieutenant KGASM Wijerathne, Leading Engineering Mechanic DLK Mudiyanse and Able Seaman WGGU Senarathna, crew members of the patrol boat SLNS Ranarisi, Sri Lanka Navy, nominated by Sri Lanka, who planned, coordinated and executed the challenging evacuation of one casualty and two crew members from the vessel.

Letters of commendation will be sent to:

1.     The Master and crew of the emergency rescue and response vessel Esvagt Cantana, nominated by Denmark, for saving the life of a crew member following his sudden collapse onboard.

2.     The crews of the fishing vessels Takaei-maru, Hisaei-maru, Eiko-maru and Tomo‑maru, nominated by Japan, for rescuing 62 crew members and passengers, including 52 elementary school students, of the sinking M/V Shrimp of Art.

3.     Ensign José Luis Sandoval Estrada, Chief of the Speedboat Squadron, Puerto Cabezas Naval Base, Naval Force of the Nicaraguan Army, nominated by Nicaragua, for coordinating the evacuation of 2,800 people from the Miskito Keys and adjacent keys, as well as from several communities in the North Atlantic Autonomous Region, in extreme weather conditions caused by Hurricane Eta.

4.     Capitan Bogdan Rusu, Master of M/V Cosco Malaysia, nominated by Romania, for the rescue of four persons on board the sinking S/V Yes Dear, during tropical storm Sally.

5.     The Master and crew of the oil tanker BW Rhine, nominated by Singapore, for their courage and joint effort to combat fire following an explosion onboard, preventing further damage and pollution.

The Council also endorsed a recommendation that special recognition should be given at the Awards ceremony to all seafarers, for the outstanding response and endurance they continue to demonstrate during the pandemic crisis.

The crew of the M/V Ocean Ang were nominated by China.

Captain Volodymyr Yeroshkin and the crew of the oil tanker Maersk Etienne were nominated by the International Chamber of Shipping.

It was agreed that, as per past practice, all forces and merchant vessels involved in the rescue of migrants at sea should be mentioned by the Secretary‑General at the IMO Awards Ceremony, for their outstanding humanitarian effort.

The awards will be presented at an awards ceremony to be scheduled by the Secretary‑General.

About the IMO Award for Exceptional Bravery at Sea

This annual award was established by IMO to provide international recognition for those who, at the risk of losing their own life, perform acts of exceptional bravery, displaying outstanding courage in attempting to save life at sea or in attempting to prevent or mitigate damage to the marine environment. Such acts of bravery may also involve extraordinary seamanship skills in very difficult conditions or any other display of outstanding courage.

This year, a total of 37 nominations were received from 23 Member States and four non-governmental organizations in consultative status with IMO.

The Assessment Panel submitted its recommendations to a Panel of Judges, consisting of the Chairs of the Council and Committees of IMO, which met on 21 June 2021 to select the recipients of the Awards