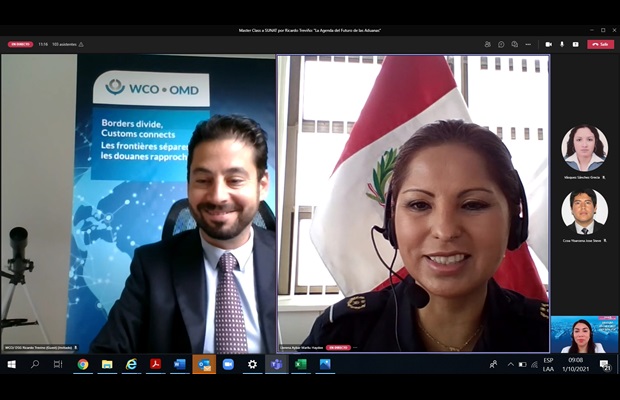 BRUSSELS : The Deputy Secretary General (DSG) of the WCO, Mr. Ricardo Treviño Chapa, delivered a presentation during the celebration of the 248th Anniversary of the Peruvian Customs Administration (SUNAT), at the invitation of the Administration’s Deputy National Superintendent, Mrs. Marilú Llerena. His aim was to provide an overview of what the future might hold for Customs administrations all around the world.

The Deputy Secretary General explained that the agenda and priorities of Customs for the future had to be defined in full accordance with the environment in which Customs operated on a daily basis, and the emerging trends around it. He said that in 2020-2021, the WCO Secretariat had launched a series of regional consultations with Members to exchange views on how they perceived their future. In this context, the Secretariat had undertaken a deep analysis of current external factors that could have an impact on Customs, both now and tomorrow.

This work had concluded with the development of the WCO Environmental Scan and its presentation to the Policy Commission and Council in June 2021. Following the PESTLE methodology (i.e., Political, Economic, Social, Technological, Legal and Environmental), the Scan offered a broad overview of the world as it currently stood, and suggested some desirable futures towards which the WCO as a whole should move.

The Deputy Secretary General went on to say that the Secretariat had recently launched a new round of regional consultations in order to draft and design the next WCO Strategic Plan. This Strategic Plan would fully take into consideration the results of the Environmental Scan. The objective now was to move from the broad analysis offered by the Scan to the definition of concrete and limited actions and priorities for the near future. The agenda of Customs in the near future would be reflected in the result of this operationalization of the Environmental Scan, i.e., the Strategic Plan, while the longer-term perspective would be closely linked to the completion of the desirable futures identified through the Scan.

He concluded by stressing that the future of Customs was related primarily to their capacity to adapt to modern realities, such as the full use of technology and data, the transformation of trade, and the new threats faced by societies. Adequate responses would guarantee that Customs remained trusted partners for their governments and businesses, thus ensuring their sustainability in a continuously changing world.