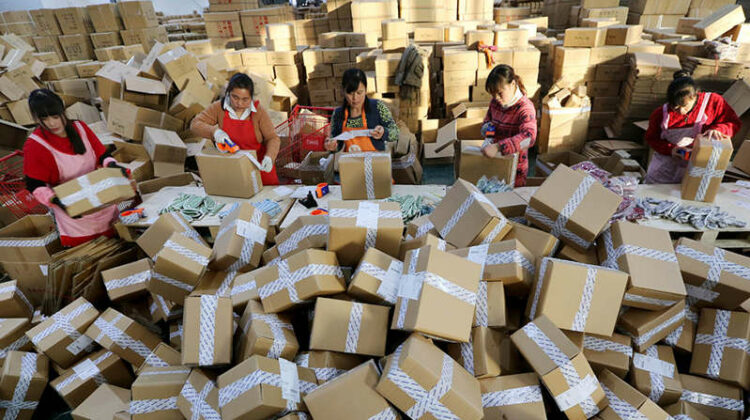 Christmas for millions would not be possible without China: many of the presents found under festive trees around the world are made in the manufacturing powerhouse.

But for weeks now, there has been increased congestion at ports in many countries, with retailers sounding the alarm bell that deliveries for the holiday season could be delayed.

“I am buying all the things for my daughter’s birthday” says Rachel Teller in New York, who is buying now in anticipation of a shortage in goods like toys, and subsequent price rises.

The crisis has largely been driven by the Covid-19 pandemic, with demand surging as economies re-open.

Meeting that demand hasn’t been easy – producers are simultaneously grappling with labour shortages and a slowdown in the transport system.

In Asia, manufacturing hubs, like Vietnam, are just emerging from a wave of the coronavirus, causing a disruption in production. While China – the factory of the world – is also facing an energy crunch leading to shutdowns at manufacturing hubs and ports.

The voyage for a container from Asia to the US usually takes just two weeks, according to Peter Sand, chief shipping analyst at industry body Bimco.

But at the moment it is taking about 70 days from “when the product leaves the manufacturing site, to when it arrives at the sales point in the US”.

That means that even if a popular toy leaves China today, it now won’t make it to the shops in the UK, mainland Europe or the US in time for Christmas. That’s largely because the ongoing logjam at US ports is having a ripple effect back in Asia.

Chinese ports don’t have enough shipping containers because they haven’t returned from the US, according to Alvia Ea, chief executive of Singapore’s largest container haulage platform, Haulio.

In August, one of the world’s busiest container ports in China’s north eastern port of Ningbo, was partially shut due to an outbreak of Covid-19. Another port in Shenzhen was also closed in May.

Too little, too late?

To try to ease the situation, US President Joe Biden announced that the Port of Los Angeles in California would work around the clock. But not everyone thinks this will help enough at this point.

“If only this initiative was taken 12-months ago, the clogged up logistics in the US could have been in a much better position today than is the case,” Mr Sand says. “It’s not enough to keep ports open 24/7.”

He adds that to resolve the problem all parts of the supply chain – including truck drivers, train operators and warehouse operations – need to swiftly “add capacity”.

The US is, by far, the world’s biggest importer of toys, buying more than $17bn (£12.4bn) worth of them. If you include games and sporting goods in that total, the figure almost doubles. And about 80% of those products come from China.

Many of the top toy factories in China are based in a coastal province of Guangdong but it, along with other parts of China, have recently been hit by power cuts.

The energy crunch in the world’s second largest economy has led to electricity rationing – another blow for businesses already facing rising costs for raw materials and the impact of coronavirus lockdowns.

Before the pandemic took hold – and amid concerns over the US-China trade war – some manufacturers had already begun to move their production away from China, to countries like India and Vietnam.

“For example, Ho Chi Minh City, which is one of the fastest growing manufacturing hubs in the world right now, was under a pretty strict lockdown for the last couple of months.”

When it comes to toys: “China is also strong on plastics and it has a huge industry of injection mould and tooling makers which are important in toy manufacturing. This is not something that can be replicated elsewhere in just a few years.”

So, how long could the logjam go on? “Maybe three months down the road, we will see the choke come back to Asia again,” Mr Ea says.

“But that is cyclical. It’s always been like this because there is an imbalance of trade between West and East.”

He is expecting some of the supply chain problems to be resolved next year as the shipping industry sees more containers coming on to the market.

“The world is adjusting to living with Covid as endemic,” says Mr Ea.

There are a number of factors disrupting the global supply chain which the world needs to adjust to.

The hope is it doesn’t disrupt Santa Claus’ plans and Christmas too much.