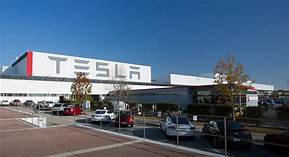 Jostling has started to host the assembling or production plant of Tesla Inc, after the Elon Musk-led electric car-maker opened a research and development unit in Bengaluru ahead of hitting the road in India.

With India’s biggest ports — Kandla and Mundra — in Gujarat, the State is pitching for the Tesla unit.

“The Smart Industrial Port City that Deendayal Port Trust is developing on more than 800 acres could be ideal for Tesla,” Mehta told. According to industry sources, Gujarat is on Tesla’s radar as the State has established itself as a manufacturing powerhouse for auto and auto components, which Tesla can leverage.

With a plant near a port, the electric vehicle company will to save on logistics costs. This will also fit in well with Prime Minister Narendra Modi’s vision of port-led development model

“Tesla will have huge import and assembling requirements. So, locating the plant next to a port, than in the hinterland, will save a lot on logistics costs,” said S Sittarasu, business development team leader at Deendayal Port Trust.

Located at Gandhidham on the Gulf of Kutch, a potential plant at Deendayal could also be the Asia manufacturing hub for Tesla from where it can tap the Gulf markets including Dubai at lower logistics costs given the short sailing distance to these places.

Tesla can take advantage of the Production-Linked Incentive (PLI) scheme of the Central government, the benefits accruing from GST as well as other benefits extended by the Gujarat government in line with the incentives offered to the automotive hub in Sanand.

“All these 5-6 parameters boil down to Kandla emerging as the ideal destination for Tesla whether it want to import, assemble, manufacture or export cars,” Sittarasu said, adding that Deendayal Port will soon make a pitch to the US-based car maker to house the project.

Deendayal, though, is expected to face stiff competition from nearby Mundra Port, India’s biggest port by volumes handled and run by Adani Ports and Special Economic Zone Ltd (APSEZ).

Mundra’s advantages, aside the land availability, are its deep draft and freedom to set rates being a private port. Plus, it will be linked to the Dedicated Freight Corridor (DFC).

Centre-owned Jawaharlal Nehru Port Trust (JNPT), which had pursued Tesla to lease land in its Free Trade Warehousing Zone, has slipped behind other contenders such as Karnataka, Andhra Pradesh and Haryana for the project.