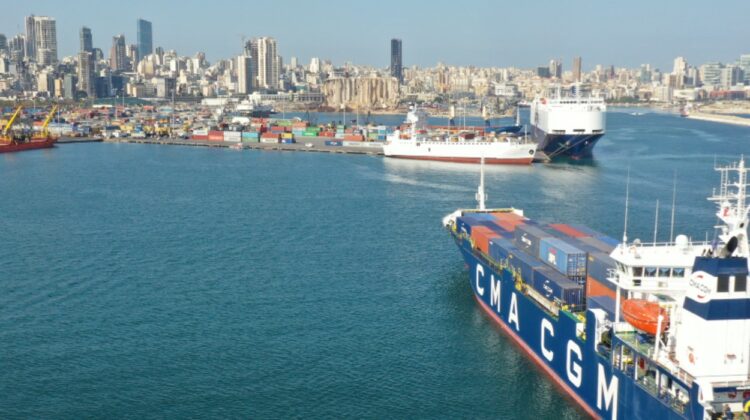 • An initiative carried out with 12 major donors and Les Enfants de la Méditerranée, with the participation, for general coordination, of the International Relations Department of Public Assistance – Paris Hospitals for several months.

• A transport of 49 TEU (Twenty foot equivalent unit) provided free of charge between Marseille and Beirut on board the Aknoul, a ro-ro ship of the CMA CGM Group.

MERSEILLES : The CMA CGM Foundation is continuing its actions to support the Lebanese population in the face of the dramatic situation that Lebanon continues to face. In particular, it allows the transport, within the framework of its “Containers of Hope” operation, of 49 TEUs (Twenty foot equivalent) of humanitarian aid. All the containers were loaded on board the Acnoul, a ship belonging to the CMA CGM Group, a world leader in maritime transport and logistics, which arrived in Beirut today. This support operation, set up with the support of the French Embassy in Beirut, aims to meet the pressing needs of the country.

Donations to meet the basic needs of the Lebanese population
Humanitarian containers arrived in Beirut today with:
• Medicines and medical equipment for the fight against COVID-19 offered by the Crisis and Support Center of French Ministry of Europe and Foreign Affairs, the French Ministry of Solidarity and Health, in conjunction with Public Health France, the Auvergne-Rhône-Alpes Region (Regional Council), the Rotary Club Thiviers-Sorges and the Rotary Club Plumereau Tours.
• 5 batches of a regulated drug for the resuscitation services of 5 structures (FAL, Lebanese Ministry of Health, Hôtel-Dieu Hospital in France, Notre Dame Maritime Jbeil Hospital, Sisters of the Cross Hospital).
• Nearly 55 tonnes of powdered infant milk donated by the CMA CGM Foundation to 5 Lebanese NGOs, and the “Change Lebanon” collective, by the company Sodilac and the Isigny Sainte-Mère Cooperative, to the Beit El Baraka association, with support from the France-Lebanon Endowment Fund and its donors, the Abouzeid Foundation and the Lebanon Avenir Meilleur Association (ALAM).
• Computer and telephone equipment, and professional kitchen equipment donated by the International Committee of the Red Cross (ICRC) and Les Enfants de la Méditerranée (LEM).

A humanitarian aid operation for the benefit of recognized NGOs and Lebanese hospitals
Donations will be given to the central military pharmacy of the Lebanese Army, to 3 local hospitals – Hôtel-Dieu de France, Saint Joseph des Sœurs de la Croix and Notre-Dame Maritime Jbeil, and to local associations and organizations specializing in humanitarian aid – Association du Foyer de l’Enfant Libanais (AFEL), Nawraj, the Rotary Club Beirut Metropolitan and Beit El Baraka. The International Committee of the Red Cross has dispatched equipment including IT, water and sanitation, Workshop and orthopedics for its own operations. The perfect distribution of these donations will be monitored by the French Embassy in Lebanon.

Almost 5 additional tons of powdered milk donated by the CMA CGM Foundation
To meet the urgent needs of Lebanese families and the nutritional needs of Lebanese children under 3 years old, the CMA CGM Foundation bought nearly 5 tons of powdered milk infantile. The cans of milk will be distributed to the Lebanese army and to 5 local NGOs – Ruwwad Al Tanmeya, Rghif Rahme, Libami, Jamyiat Al Watan, the Catholic Youth Center – with the support of CEVA Logistics, a subsidiary of the CMA CGM Group . This action follows the purchase and delivery in June 2021 by the CMA CGM Foundation of more than 4,000 boxes of infant milk and 10,000 pieces of nutritious infant products for 9 Lebanese NGOs.

A strong commitment in favor of Lebanon
With this transport of humanitarian donations, the Group is continuing its commitment in Lebanon through the CMA CGM Foundation by reiterating its support for the Lebanese people. Since September 2020, 130 humanitarian containers have been sent to Beirut free of charge as part of the “Containers of Hope” operation for the benefit of more than 20 Lebanese NGOs and hospitals.