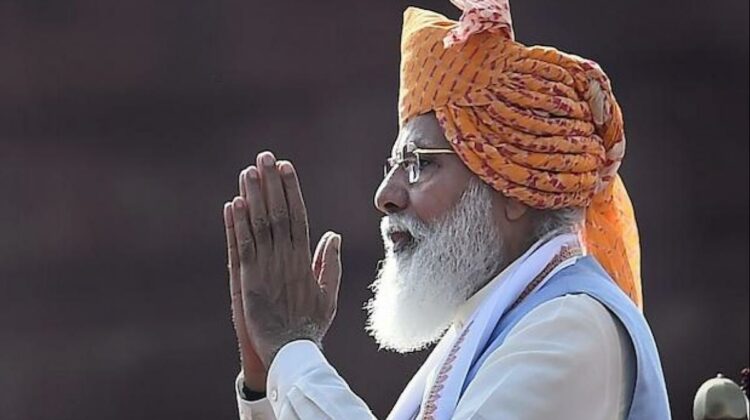 NEW DELHI : The government will launch a Rs 100-trillion infrastructure plan that will beef up roads, ports, airports while providing jobs, said Prime Minister Shri Narendra Modi on Sunday 15th August, as he asked Indians to join the post-Covid reconstruction of India and put the horrors of the pandemic behind them.

Pradhan Mantri Gatishakti Bharat Master Plan will help boost productivity of industries and it “will create job opportunities for hundreds of thousands”, he said at the Independence Day celebrations in Delhi.

Modi announced a Mission Circular Economy that will replace petroleum with other forms of energy to make India energy independent by 2047. A National Hydrogen Mission; new systems to ensure last-mile delivery of government services and more support to the socially backward were among other new measures he announced.

His emphasis, like in speeches before, was on ‘Indian-made’: whether it was building fighter aircraft or mobile phones. He said India used to import mobile phones in large numbers but is now exporting them as well. He asked exporters to make goods that were not merely competitive but also high quality, saying “your goods are brand ambassadors for the country”

In our eyes, there must be a dream: a dream to capture the world market,” he said about Indian business. He committed the government’s full support to startups.

Glossing over the crisis in the public health system, especially during the second wave of Covid-19, Modi said the world had praised India for its management of the infection. India had a huge population presented but it was forging ahead in vaccinating people. “But can you imagine what might have happened if India did not have its own vaccine?” he asked. He promised the expansion of public health facilities to panchayat levels.

The PM called the ongoing protests against laws liberalising India’s agriculture market as a small versus big farmer problem. The Swaminathan committee formula for Minimum Support Price had already been implemented, but it was farmers with small land-holdings that faced the biggest challenge.

He referred to the ongoing digitisation of land records would help in establishing ownership and bringing down litigation, helping farmers in better use of their land. Kisan trains were already running to transport produce from one corner of India to another. Further road infrastructure would hasten this process.

Malnutrition was affecting the growth of children in low-income groups. Through ration shops or the mid-day meal scheme, fortified rice will be made available under every government programme by 2024.

As many as 75 Vande Bharat trains would be in place by 2023. India will have better air connectivity in the coming years with new airports. Work to connect capitals in the north eastern region with rail services will be completed soon.

India’s production-linked incentive plan would make manufacturing globally competitive, he said, making the statement after pne of his ministers earlier in the week criticised Indian industry for not doing enough to aid national manufacturing. The PM asked state governments to revisit unnecessary regulations and scrap those that slowed down the system.

The Prime Minister dwelt extensively on climate change and called for “environment security”. The Indian Railway system will meet the net zero target by 2030; India has already surpassed the developed world in meeting per capita emission levels and the emphasis on renewable forms of power will further reduce the country’s environment impact. “Green energy will lead to green jobs,” he said.

Modi said two challenges were evident in a post-Covid world: terrorism and expansionism. “The world is looking at India with new eyes. And India is also replying to the challenges with resolve. Whether it is surgical strikes or expansionism, India is responding with courage and vigour,” he said. Elections will be held in Jammu and Kashmir “soon”.

There were some firsts in the Prime Minister’s speech. His speeches are usually in pure Hindi but this time it was peppered with English words and phrases. For the first time, he read out a poem, presumably penned by him, as part of his speech in the tradition of Atal Bihari Vajpayee.

Possibly for the first time, in a somewhat reflective tone, Modi referred to his tenure as Prime Minister and how future PMs would judge him. This reference to his place in history seemed to suggest a succession plan might be in the making.