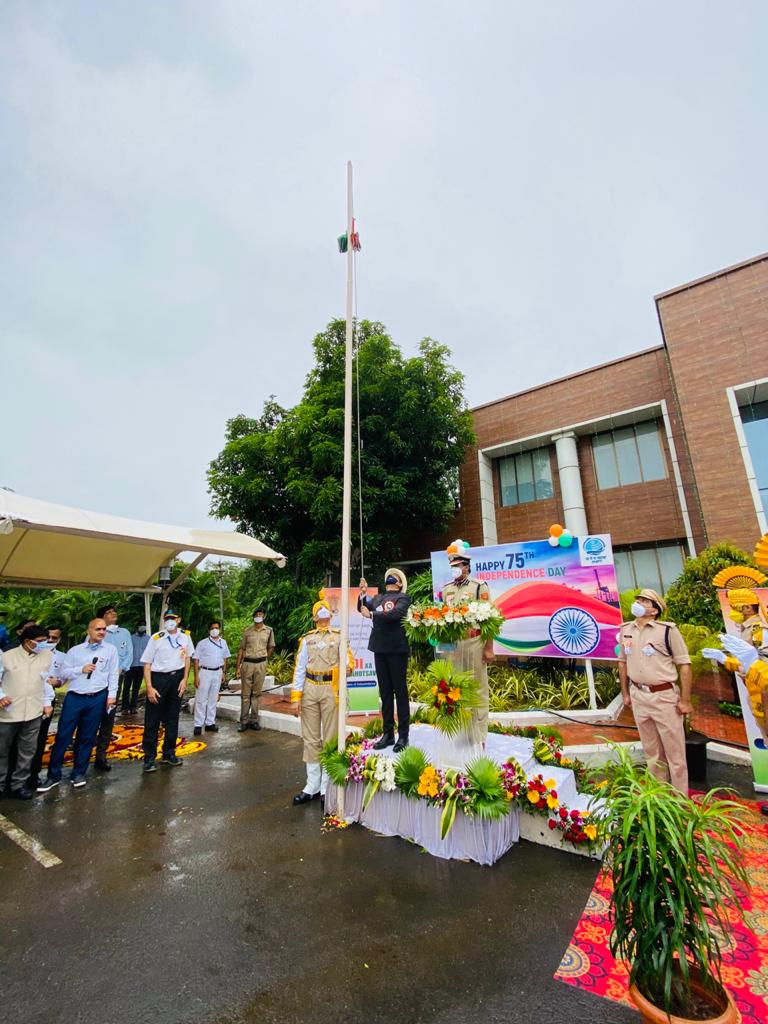 MUMBAI : Jawaharlal Nehru Port Trust (JNPT), one of India’s premier container handling Ports, showcased its patriotic colours by observing India’s 75th Independence Day, keeping all preventive measures in mind amended by the government in the wake of the Covid-19 pandemic. Chief Guest Shri Unmesh Sharad Wagh, IRS, Dy. Chairman, JNPT hoisted the national flag followed by the singing of the National Anthem in the presence of HoDs and employees at the Administration Building.

JNPT observed the day following all preventive measures such as maintaining social distancing, wearing of masks, proper sanitisation and avoiding large congregation. The frontline warriors, who helped the port remain operational and helped the port keep the logistics supply chain active, were at the centre of attention this year during the Independence Day celebrations.

At the Independence Day ceremony Shri Unmesh Sharad Wagh, IRS, Dy. Chairman, JNPT, said, “Today we celebrate the essence of freedom and democracy of this prodigious nation. JNPT is proud of its contribution to the nation and of upholding democratic values. We pride ourselves on playing a major role in shaping India’s blue economy. On this day, I salute everyone who has contributed to building a vibrant India. I also thank the esteemed stakeholders, EXIM community and valued employees who have worked hard even during the lockdown period to keep the port operational and significantly contributing to the maritime growth of the Nation.”

JNPT also planned and executed various activities under ‘Azadi Ka Amrit Mahotsav’, an initiative of the Government of India to celebrate and commemorate 75 years of independence of progressive India and the glorious history of its people, culture and achievements. The auspicious occasion was concluded with the Deputy Chairman extending warm Independence Day greetings to all the employees and stakeholders of JNPT.