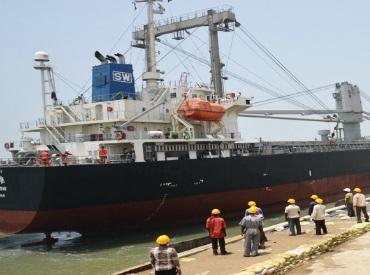 MUMBAI : The government’s Rs 2,500 crore-plan to use private players to develop seven operational cargo berths run by state-owned ports has got a thumbs up from the industry.

“For berth No 9, we are planning a bulk cargo terminal in a public-private partnership model at an investment of over Rs 400 crore. At the expression of interest stage, we have seen interest from half-a-dozen players. We are getting interest from major players like Adani, DP World, Essar and Baxi Group,” said a source aware about the developments at VO Chidambaranar Port Trust (formerly Tuticorin Port Trust) in Tamil Nadu.

Another source said that the majority of private players, including Essar, are in the race to develop the South Quay Berth (SQB) at Paradip Port Trust for around Rs 75 crore. VOC is also planning to develop the North Cargo Berth-III that may see investment of around Rs 420 crore, on PPP mode.

This was part of a proposal mooted by the finance minister Nirmala Sitharaman in the Union Budget that indicated that seven projects worth Rs 2,000 crore will be on offer for private players as part of the new model of management of ports. Under a new law passed by the parliament in February 2021, ports are moving towards an authority model of governance, moving away from the trustee model before. An Essar official confirmed that the company is interested in Chidambaranar and Paradip projects.

The largest of the seven projects is at Jawaharlal Nehru Port Trust (JNPT), which plans to privatise its container terminal an investment of around Rs 860 crore. According to the media reports, the port trust is likely to come out with a global tender in this regard, in which APSEZ, DP World and APM Terminals Management BV are likely to participate. DP World and APM are already operating terminals in JNPT. JNPT will also see private participation for developing a dedicated berth run to handle ships that ply only on local routes at an investment of Rs 170 crore.

Other major ports that may see private participation include Deendayal Port Trust in Kandla, Gujarat for developing Berth No. 14 at an investment of Rs 300 crore and the West Quay Berths 7 and 8 at Visakhapatnam Port Trust (Rs 288 crore).