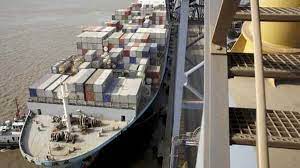 VISAKHAPATNAM : Gangavaram Port promoters fear ties with Myanmar military could hurt Adani Ports valuations; want cash for half their stake instead of shares in Adani Ports.

The promoters of Gangavaram Port Ltd are renegotiating their sale of the port to Adani Ports and Special Economic Zone Ltd to increase the cash component of the deal, said a person with direct knowledge of the development.

The DVS Raju family, which owns a 58.1 percent stake in Gangavaram, wants a cash consideration for half their stake instead of an all-share deal finalised earlier, said this person, a banker representing the Gangavaram promoters, on condition of anonymity.

On March 23, Adani Ports had announced that it had struck a deal to acquire the Raju family’s stake in Gangavaram for Rs 3,604 crore. Earlier that month, Gautam Adani-promoted firm had purchased a 31.5 percent stake from Warburg Pincus for Rs 1954 crore. Both these deals valued Gangavaram at Rs 120 a share.

According to the banker cited earlier, the deal with the Raju family was a share swap – six shares of Gangavaram were to be exchanged for one share of Adani Ports. The closing price of Adani Ports shares on March 22 was Rs 721.6.

Now, however, the Raju family is concerned that Adani Ports’ valuation will be hit after S&P Dow Jones Indices removed the stock from its sustainability index and some Scandinavian investors sold their holdings citing ESG (environment, social and corporate governance concerns), the banker said.

Thus, they want half the sale consideration – Rs 1,800 crore – in cash, the banker added.

Emails sent to Adani Ports and the Raju family were unanswered till the time of publishing.

On April 13, S&P Dow Jones Indices said it will remove Adani Ports from its sustainability index following reports of its business ties with Myanmar’s military that has been accused of human rights violations after a coup.

Whenever a company is removed from an index which is widely followed, it stands to lose value as funds tracking the benchmark will also cut it out.

Following the S&P announcement, Adani Ports shares fell around four percent over the next four days but have since recouped losses. At Wednesday’s close, they were trading at Rs 738.10 a share, up nearly 2.3% from the March 22 close.

In 2019, Adani Ports won a contract to set up a container terminal in Yangon, Myanmar. In March this year, a report released by two rights groups showed that the company will pay land lease fees for the project to Myanmar Economic Corp, a military holding company under US sanctions for supporting the regime that overthrew the democratically elected government.

As investors distanced themselves, Adani, on May 4, said that it will abandon the Myanmar project and write down the investment if it was found violating the US sanctions.

The company added that it was working with independent think tanks to ensure mitigation of human rights violations risks and building an equal opportunity platform through sustainable value creations.

“Adani Ports’ decision to look at abandoning their project in Myanmar could prove highly influential in an ESG-sensitive era, particularly to those with fewer resources to undertake the same depth of screening. Adani Port’s shareholder register is populated with funds that are largely influenced by ESG standards,” said an analyst with a domestic brokerage house who didn’t wish to be identified.

The write-down of the Myanmar project will not materially impact the company as it is only about 1.3 percent of total assets, Adani Ports said.

The importance of Gangavaram

Gangavaram is the latest in a bunch of acquisitions by Adani Ports. With a 64 million metric tonne (MMT) capacity, Gangavaram will add significantly to Adani Port’s current capacity of 498 MMT. It has a concession from the state government that extends till 2059 and analysts expect it to grab more share from Vishakhapatnam port which is just 26 km away.In the last three financial years, Adani Ports has made as many as six acquisitions including the Katupalli, Dighi and Krishnapatnam ports – it now commands one-quarter of India’s ports capacity.

Analysts expect these acquisitions to help the company gain further market share in the Indian ports sector. In particular, both Krishnapatnam and Gangavaram ports are operational and are expected to add meaningfully to Adani Ports earnings. Kotak Institutional Equities, for example, projects Adani Ports’ operating profits to double between FY20 and FY23 thanks to these acquisitions and market growth.

Opinion : Why shipping needs to be rethought

Opinion : Why shipping needs to be rethought 24 Jan 22