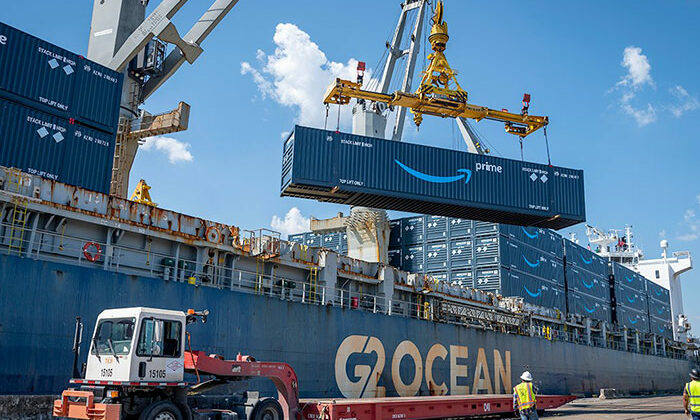 SEATTLE : The trend for shippers to switch goods from container vessels to bulk carriers looks to be picking up pace. Among those taking that route is Amazon. The Port of Houston recently tweeted images of the G2 Ocean vessel Star Lygra arriving in port with a cargo of Amazon boxes.

Though the Star Lygra is officially classed as a general cargo ships, most people would characterize it as an open hatch bulker. Bergen, Norway headquartered G2 Ocean, a joint venture between Gearbulk and Grieg Maritime, is one of the world’s largest operators of open hatch vessels and Its managing director, Atlantic, Scott Krantzcke, says that, due to the ongoing global supply chain challenges, G2 Ocean has carried a greater number of containers in 2021.

“We are expecting this trend to continue well into 2022. By doing so, we hope to ease the situation for customers and provide them with the reliability they need,” he says,

e-commerce cargo is booming and moving through Port Houston! The Star Lygra general cargo ship arrived to our Turning Basin terminal with some unusually happy TEUs. Can you take a guess? pic.twitter.com/4VTHZmCXOm— Port Houston (@Port_Houston) October 5, 2021

COCA-COLA GOES FROM BOXES TO BAGS

Meantime, Coca-Cola, too, has been shifting some goods to bulk carriers, but not in containers.

“When you can’t get containers or space due to the current ocean freight crisis, then we had to think outside the box (or the container),” Alan Smith, Procurement Director – Global Logistics at the Coca-Cola Cross Enterprise Procurement Group in Meath, Ireland, said in a recent LinkedIn post, noting that the company was loading three bulk vessels that week with 60,000 tonnes of material to keep its production lines running across the world.

“This is the equivalent of 2,800 TEU’s that traditionally would have shipped with the shipping lines,” he wrote, “The first of many we hope over the coming months and a prime example of excellent collaboration between our procurement teams, our supply chain partners and our suppliers.”