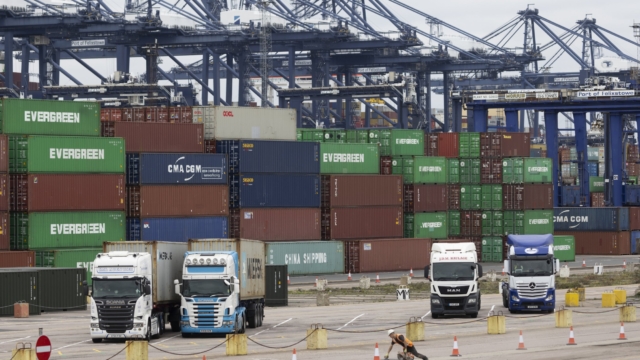 FELIXTOWE : The world’s biggest shipping company has diverted another of its container vessels away from Britain’s largest port after warning congestion is causing “significant disruption” to the arrival of goods from Asia and the Far East.

Maersk said it was sending vessels sailing to Felixstowe from the Indian port of Chennai away from the Suffolk port, which has become gridlocked with containers in recent weeks as Britain’s lorry driver shortage creates difficulties with coping with the annual influx of Christmas goods.

The move came amid signs of strain elsewhere in the complex shipping eco-system which conveys cargo containers to Britain as operators of so-called “feeder” vessels, used to deliver UK-bound containers which are off-loaded at Continental ports, complained of delays and difficulties in securing berths.

Several thousand containers a week which would have previously been delivered directly to UK terminals such as Felixstowe are now having to reach Britain after vessels were diverted to European hubs such as Rotterdam, Antwerp or Hamburg.

One Felixstowe-based freight operator said: “It is yet another problem in the system. The Continental ports are also getting clogged and there is no slack in the feeder system. Even if you can get space on a ship to bring your containers to UK ports, the competition for a berth is brutal – you can be waiting for days.”

Danish shipping giant Maersk said that in order to protect the “operational integrity” of its container service, its vessels would instead dock at London Gateway, a relatively new deep water container port on the Thames, from the beginning of November. Maersk announced a week ago that it was also diverting one of its giant “Triple E” vessels, capable of carrying some 18,000 containers, away from Felixstowe to the Continent each week to avoid delays at the British port.

In a statement to its customers, Maersk said: “The ongoing situation with congestion and port disruptions prolong each port stay our vessels make and significantly disrupts their normal schedules.

“We take this action to keep your supply chains moving and we are working hard to ensure that we can return the network to normality as soon as possible.”

An industry body warned this week that there was no sign of a significant improvement in the HGV driver shortage, which is being cited by ports and shipping lines as the prime cause of the logjam in supply chains. The Road Haulage Association told MPs that “things are not visibly getting better at this stage” in efforts to reduce the 100,000 vacancies for truckers despite signs that salaries and signing-on payments have increased.

The result is that ports in Britain and on the Continent face a near certainty of delays and congestion until at least next year. Major terminals such as Felixstowe, which receives more than a third of the UK’s container goods, face particular issues as average waiting times for the collection of cargo boxes more than double to around ten days and storage room is close to capacity.

The Suffolk port last week temporarily closed its gates to receiving returns of empty containers destined for a number of shipping lines but has insisted its situation is improving. Freight forwarders have complained that they are having to drive “empties” hundreds of miles to container facilities in places such as Liverpool and Immingham, near Hull, because of a lack of space in southern ports.