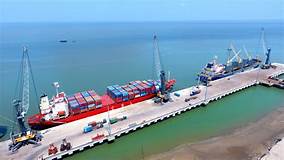 Aurobindo Realty and Infrastructure will buy the stake from Kakinada Infrastructure Holdings Pvt Ltd, one of the original promoters of Kakinada Seaports, multiple sources said. Business Line could not ascertain the value of the deal.

The proposed stake purchase was cleared by the Andhra Pradesh government in December, clearing the decks for signing the deal.

“Government hereby accord permission to accept the request of Kakinada Seaports Limited for sale of 41.12% shareholding held by Kakinada Infrastructure Holdings Private Limited in Kakinada Seaports to Aurobindo Realty and Infrastructure Private Limited,” R Karikal Valaven, special chief secretary, AP Government, wrote in an order.
“The AP government approval has come, and the deal will be closed soon,” a company source said.

Kakinada deep-water port was the first port in Andhra Pradesh to be privatised by the state government. Kakinada Seaports was awarded the rights to operate, maintain and manage the port on a 30-year contract beginning March 1999. The contract can be extended by 20 years on mutually accepted terms by both the parties.

The port has contributed more than ₹100 crore per annum for the past three years as revenue share to the AP government as per the terms of the concession agreement.

In September 2020, Aurobindo Realty and Infrastructure signed a deal to buy the 51% stake held by GMR SEZ and Port Holding Limited (a wholly-owned unit of GMR Infrastructure Ltd) in Kakinada SEZ Ltd for ₹2,610 crores including sub-debt.

As part of the deal, the 100% equity stake in the planned Kakinada Gateway Port Limited held by Kakinada SEZ (KSEZ) would also be transferred to Aurobindo Realty and Infrastructure, according to an announcement by GMR Infrastructure on September 25 last year.

Kakinada Gateway Port Ltd was awarded a contract by the Andhra Pradesh government to set up a greenfield commercial port in Kona Village of East Godavari.

Kakinada deep water port and the planned Kakinada SEZ and gateway port are located nearby.

The two acquisitions are part of a strategy by Aurobindo to seize the rapidly growing opportunities in the infrastructure sector, one of the sources said.