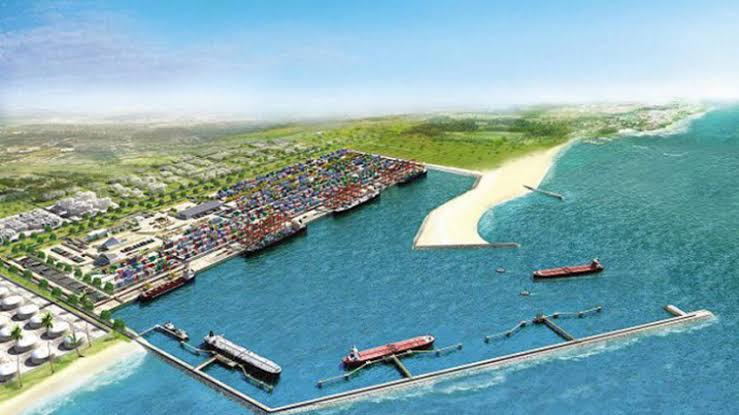 Experts concerned expect that Matarbari will become the most important export-import hub in the South-Asian region in future as the region is bustling with a number of mega projects, including Deep-Sea Port, reports BSS.

Construction works for the dream deep-sea port project is going on in full swing. With the pandemic is almost retreating, the work is on without any break. The project is likely to be completed by 2026 next.

Talking to the news agency, Chittagong Port Authority (CPA) Chairman Rear Admiral M Shahajahan said the deep-sea port being built by the CPA, will become the region’s most important export-import hub in future.

“It will play a catalyst role and gain the reputation of the region’s most important feeder port for mother vessels from the ports of neighbouring countries,” he added.

The CPA chairman informed that once the ‘Matarbari Port’ comes into operation, it is expected that the country’s first deep sea port would contribute 2.0 to 3.0 per cent to the growth of the national economy.

He said the main objective of the project is to enhance the cargo handling capacity of Bangladesh by constructing the Matarbari Port and thus fulfill the demand of international trade as well as facilitating speedy port services with the neighbouring countries.

“The existing yearly container handling capacity of the Chittagong Port is 3.2 million Twenty-foot Equivalent Units (TEUs) of the container. The growing demand will exceed the existing handling capacity within the next few years. We have to increase the handling capacity by more than 4 million TEUs by 2033. Mongla and Payra ports will not be able to meet the growing demand. So, Matarbari and Bay Terminal are likely to be the best befitting in this regard. The Matarbari Port is likely to add 2.0 to 3.0 per cent in GDP in the country’s economy,” he added.

He said the maritime connectivity of Bangladesh would increase remarkably, as the deep-sea port will enhance the total capacity of the Chittagong Port in handling cargoes and containers several times.

The Matarbari Deep-sea Port Development Project is being implemented with the financing of the Japan International Cooperation Agency (JICA). The CPA completed the process of acquiring 1,225 acres of land for the construction of the port at Moheshkhali. In the first phase, a total of 283 acres of land were acquired. A coal jetty, a storage yard and an ash pond will be built.

The JICA agreed to finance the project with an investment of more than 500 million US dollars.

At the port,   mother vessels with more than 16-metre draft will be able to berth. Currently, at the Chittagong Port jetties, vessels with only 9.5 metre draft can berth. The container vessel with only 2400 TEUs of container can berth at the CPA jetties. At the deep-sea port, the vessels carrying more than 8000 TEUs of container will be able to berth. Already the construction of a 14.3km long, 250m wide and 18.5m deep channel for the port is completed. The work to widen the channel by another 100 metres is underway.

The channel will enable ships with a capacity of 80,000 tonnes to sail in. It will look like the Kashima Port in Japan.

The deep-sea port was originally targeted for the Matarbari coal-fired power plant. Then the government decided to turn it into a deep-sea port.

President of Chittagong Chamber of Commerce and Industry (CCCI) Mahbubul Alam said the seaport will come up as one of the key hubs of trade and business in South Asia in view of its geographic locations, advantages and deep-sea port capabilities.

“So, this port might be used by our neighbours’ nations. Along with Matarbari Deep Seaport, 36 development projects, like power plants and special economic zones, are being carried out there by various government agencies. In the days to come, there will be a significant amount of foreign investment at Matarbari, and a new era of the nation’s the trade and business will be ushered.

The extensive construction projects at Matarbari will bring about a significant change in the nation’s economic landscape,” he added.