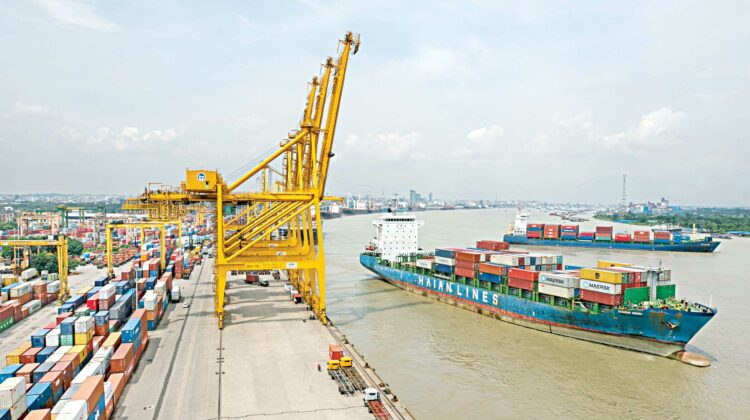 CHITTAGONG : In a rare development, Chattogram Port has been able to allow container ships to berth faster upon arrival over the past 40 days, enabling brisk delivery of imports.

Vessels usually have to wait five to six days at the outer anchorage to get the scope to dock.

This period of stay had gone up to as much as seven to eight days since the third week of July for an acute container congestion at the port amid the Eid-ul-Azha holidays and countrywide lockdown.

But for the past 40 days till yesterday, a major portion of vessels had to wait only one or two days to get berth.

Between August 8 and September 16, only one vessel had to wait for four days while nine for three days, according to a former official of Pacific International Lines who keeps track of these times.

This also decreased the daily average of vessels having to standby to anywhere from five to six whereas it was 10 to 12 in July.

The situation gradually improved since August 8, which the port users and officials deem a remarkable performance of the port.

One is the National Board of Revenue’s (NBR) decision to temporarily send import-laden containers to private Inland Container Depots (ICDs) to have the goods delivered from there until August 31, he said.

This cleared up the port’s yards within two weeks, enabling faster handling of vessels’ cargo, he said, adding that the export-laden containers from the ICDs also reached the port on time for loading.

This also helped vessels to leave within two days whereas previously they had to stay at the jetties for at least three days, said Karim.

Expressing satisfaction, Chittagong Chamber of Commerce and Industry President Mahbubul Alam said the CPA should focus on retaining the current pace of activities.

The New Mooring Container Terminal alone, with its five jetties, catered to 25 more vessels than they what they usually do within such a period, he cited while explaining the pace of activity.

Another factor is that importers have been taking deliveries on time for the last couple of weeks, keeping the yards’ occupancy at a comfortable level, said Karim.

However, vessel congestion still prevails at the transhipment ports of Singapore and Colombo, which is delaying the arrival of vessels here, he said.

Pressure of import containers has been gradually increasing since the NBR decision was no longer in effect and the situation may change within a few weeks, he added.