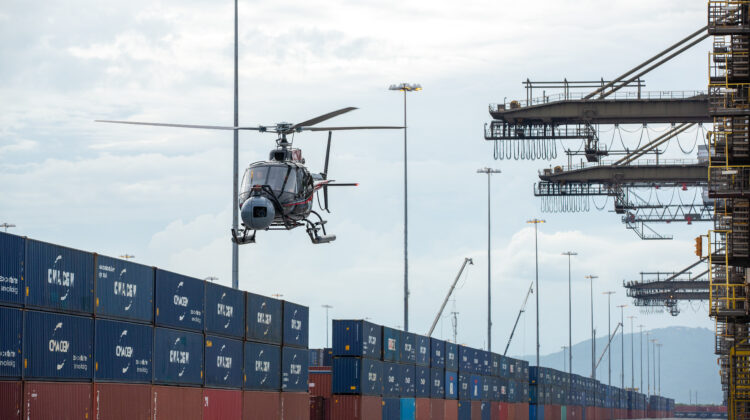 JAMAICA/MARSEILLE : CMA CGM, the world’s third biggest container line – is an official partner of the 25th James Bond film, ‘No Time To Die’. The french container line granted filmmakers EON Productions unprecedented access to its Kingston Container Terminal to shoot an exciting action sequence with a seaplane, and the vessel ‘CMA CGM FORT SAINT GEORGES’ features in the film when Bond is rescued from the ocean.

‘No Time To Die’, the new James Bond film set for worldwide release in end September-early October, has a container shipping connection with the action sequence filmed at the French line CMA CGM S A-run Kingston Container Terminal in Jamaica.

Filming took place at the CMA CGM-operated Kingston South Quay Terminal in Jamaica, a strategic transhipment hub for the Group in the Caribbean, located at the exit of the Panama Canal and the crossroads of the North/South and East/West lines.

Flying the French flag and under the leadership of French Masters, the 2,260-twenty-foot equivalent units (TEU) capacity ‘CMA CGM FORT SAINT GEORGES’ and the 3,504 TEU-capacity ‘CMA CGM FORT DE FRANCE’ and more than 1,000 containers were mobilised for the shoot. In addition, a dozen crew, including the Master, took part in the filming.

To support the unique partnership, a dedicated team led by Ms. Tanya Saadé Zeenny, Executive Officer of the CMA CGM Group, was formed at the Head Office in Marseille and CMA CGM-operated terminals in Kingston and Dunkirk.

“CMA CGM have just been up for it and been an incredible partner in this allowing us to fly a plane essentially under their cranes which nobody has ever done before,” Martin quipped.

“None of these locations are places that have had any filming done in them before. Kingston port is the busiest port in the Caribbean, CMA CGM amended their shipping schedules and worked with the port authority in Jamaica and marine police so that we could work safely in the harbour,” added Gregg Wilson, the film’s associate producer.

The CMA CGM teams at sea and ashore who worked seamlessly together to support the production are now eagerly awaiting the film’s global release.

‘No Time To Die’ is directed by Cary Joji Fukunaga and stars Daniel Craig, who returns for his fifth and final film as Ian Fleming’s James Bond. The film will be released in cinemas from September 30, 2021, in the UK through Universal Pictures International and in the US on October 8, 2021, from Metro Goldwyn Mayer (MGM) via their United Artists Releasing banner.