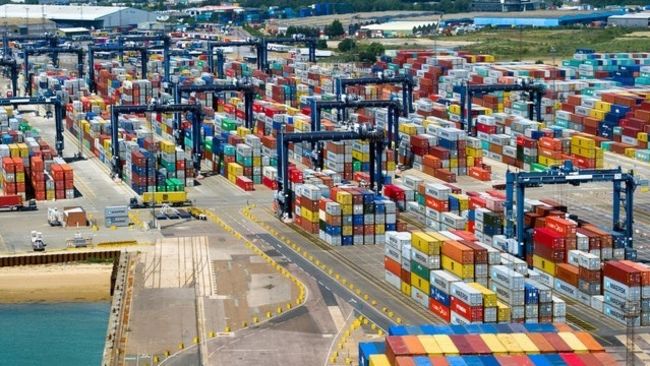 FELIXSTOWE : Britain’s biggest container port is struggling to cope with the volume of cargo passing through it with just 10 weeks to go until Christmas.

It’s peak season at Port of Felixstowe and the site has become severely congested, due in part to a shortage of HGV drivers.

The port’s management is taking action to improve the flow of traffic but is considering turning vessels away unless the situation improves.

ITV News can reveal that the average shipping container which arrives at Felixstowe is spending more than nine days at the port before it is collected. This is double the average ‘dwell time’ for import containers in 2020.

Big names are already feeling the impact, with IKEA confirming to ITV News it has faced “some challenges in returning containers” to Felixstowe but added it had “only seen minimal impact”.

A spokesperson for the retail giant said: “Like many retailers, we are experiencing ongoing challenges with our supply chains due to a variety of factors, including HGV driver shortages.

“As a result, we are experiencing low availability in some of our ranges. With Felixstowe nearing capacity, we have faced some challenges in returning containers to the port. However, we have only seen a minimal impact arising from these current issues.”

In the last week of September, the average wait time was higher than at any point last year, including during November 2020 when the port last experienced severe congestion.

Felixstowe is handling similar import volumes to 2019 but is currently importing more containers that it is managing to transport out by rail and road.

Businesses and freight trade associations blame the problems at Felixstowe on a shortage of HGV drivers, which has led to a significant fall in the number of container collections, and labour shortages at the port which is hampering efforts to unload and reload ships.

Hauliers operating at Felixstowe have told ITV News they have had to downsize due to a shortage of drivers. They estimate the number of container collections in September was down 15-20% on normal, and between 5,000 and 7,500 containers ended up stacking-in at the port as a result.The port has exceeded its “empty storage capacity” for shipping lines and now has almost 50,000 empty containers on the terminal.

The port has imposed controls on the number of empty containers it accepts.

Last week, shipping companies – including Maersk, Evergreen Marine Corp and CCMA-CGM – had empty containers turned away from Felixstowe. They were transported on to other UK ports, including Liverpool, Teesport, Port of Tyne and Tilbury.

Felixstowe handles just under 40% of all the container which are sent to and from the UK.

Import volume levels are still growing and the port is telling its customers that it is “at capacity”. Management is considering slowing the flow of imports by turning vessels away if the situation doesn’t improve.A Container ship at Felixstowe PortCredit: PA

A logistics provider, who wishes to remain anonymous, told ITV News: “I’m fed up with this. Year on year this port never has enough staff to cope with high demand.

“Now we’re hitting another peak period and all that people are talking about again is shutdowns and gridlock.

“The port can never cope with high demand. How many times must this port seize up? These volumes were forecast, there have been many meetings about the run up to Christmas. Why are we on this position?”

Last year the port of Felixstowe clogged up due to a combination of Brexit stockpiling, staff absences because of Covid and a glut of PPE arriving at the port. This year the problems are different.

There is a shortage of lorry drivers across Europe but Logistics UK, which represents hauliers, argues the situation in the UK is particularly bad. It is calling on the government to do more to bring is labour from abroad

“Logistics UK’s members are reporting that some are struggling to source drivers to pick up and deliver containers, which is causing a backlog in the port which prevents new loads from being landed; there are also issues with finding drivers to work in the port itself.”

“The logistics industry is resilient and adaptable, and Logistics UK would like to reassure people that everything possible is being done to mitigate the situation. Businesses are working tirelessly, around the clock, to find alternative routes to bring goods to the UK while the situation at Felixstowe eases.

“However, this could become a serious issue for UK supply chains, although there are steps government could take to help ease the situation.

“Logistics UK is asking the government to speed up processing the HGV driver testing backlog to get more British people driving, expand the remit of the temporary visa scheme for EU HGV drivers to encompass all types of haulage, and provide short term assistance for businesses to move containers to external sector storage facilities.”What are freeports, where will they be and what are their benefits?

“The pre-Christmas peak, combined with haulage shortages, congested inland terminals, poor vessel schedule reliability and the pandemic, has resulted in a build-up of containers at the port. The vast majority of import containers are cleared for collection within minutes of arriving and there are over a thousand unused haulier bookings most days.

“However, the situation is improving and there is more spare space for import containers this week than at any time since the beginning of July when supply chain impacts first started to bite.

“Empty container levels remain high as import containers are returned and we are asking shipping lines to remove them as quickly as possible.”Britain’s gridlocked ports could mean Christmas price hikes, warn retailers Felixstowe, the UK’s largest commercial port, is one of those worst-hit by the lorry driver shortageCredit: Steve Parsons/PA

A Department of Transport spokesperson said: “This is not a problem unique to the UK, with ports around the globe experiencing similar container capacity and supply chain issues.

“The Department and partners across Government are working closely with the freight industry, including on HGV driver shortages, to work through the challenges some of our ports are facing at an important time of the year.”

Whatever the government does or doesn’t do next, it is important this issue is resolved. If port congestion persists then it will impact the choice, availability, and the price of goods in the UK.

Robert Keen, the Director General of The British International Freight Association said: “BIFA has anecdotal evidence that the import dwell time for containers at some of UK’s main gateways for container shipping services has gone up from 5 to 9.7days over the past two weeks, but the trade association’s members are resigned to this being just part and parcel of the deep sea shipping world these days.

“It appears that one of the problems is that the up-country distribution centres are full and cannot take any more ‘stuff’.”

“It appears that early noises are being made that the peak season is going to be tough and some suspect that the shipping lines will be making plans to spread the load between Felixstowe, Liverpool, Southampton and London Gateway.”

The British Retail Consortium said: “Retailers are aware of congestion at the Port of Felixstowe which has resulted from the shortage of HGV drivers and led to a backlog of empty containers which is preventing new ships from docking. They are working closely with suppliers to mitigate issues, including finding alternative routes to bring goods into the country.

“This comes on the back of a very challenging 18 months for supply chains due to Covid and the disruption to global shipping and transport logistics. The government must act urgently to increase the size and scope of the temporary visa scheme for overseas HGV drivers while UK recruits are trained and qualified, or there could be further disruption for consumers in the months ahead.”