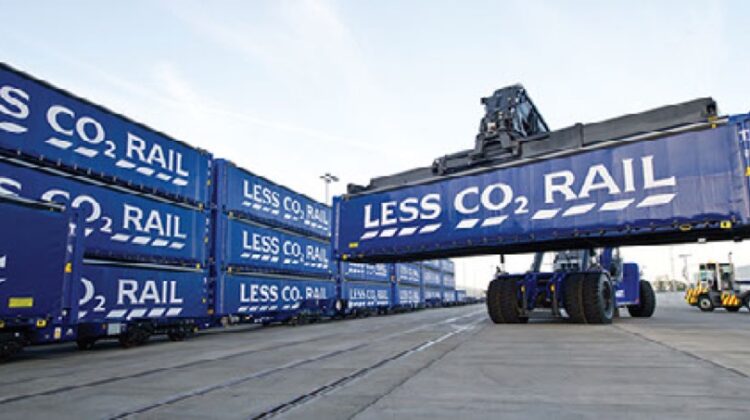 Tesco, Britain’s biggest grocery retailer says it has beaten supply chain issues by increasing its use of rail freight. The giant retailer has told markets it has not stopped yet and intends to increase its use of trains to distribute produce by almost forty per cent. Management has credited investment in rail freight for helping to keep its shelves stocked despite Britain’s heavy goods vehicle driver crisis.

The retailer has said to financial markets worldwide that it has continued to cut prices to shoppers despite commodity price increases and rising delivery costs. The familiar sight of Tesco branded intermodal trains has become a byword for resilience during the pandemic. It seems to be company policy to make those trains even more common on the British network.

In a widely distributed briefing, the Tesco chief executive, Ken Murphy, said the supermarket aimed to deliver 90,000 40-foot (2TEU) containers of goods a year to its warehouses by rail by the end of this year. Currently, the total load is at 65,000 per annum

The announcement comes despite the company widely reported as offering lorry drivers an almost unprecedented 1,000 pound (1110 euro) golden handshake this summer. The move was an attempt to beat the chronic shortage of drivers, pre-empted by the widespread desertion from the UK by EU drivers in the wake of Brexit.

From Spain to Scotland for Christmas

Tesco is not confining rail operations to the domestic market. The retailer is already bringing five weekly trains from Spain via the Channel Tunnel. From November, there will be an additional service bring fresh produce from the Iberian peninsula to Scotland. Tesco already serves its dominant position in the Scottish Highlands with its daily trains to Inverness. Murphy added that Tesco was one of only three retailers that used a significant amount of rail freight. “This is a fantastic story from a sustainability point of view, but it has really come into its own helping our supply chain resilience,” he said.

What all this means for shoppers is more reliability at a time when supplies are proving difficult to maintain in the UK. Tesco says it has secured ten per cent more turkeys for Christmas this year and intends to deliver them alongside other produce by rail. That’s welcome news for investors and comes as a relief to shoppers, hard-pressed to find supplies for Christmas. It’s not clear how the turkeys vote