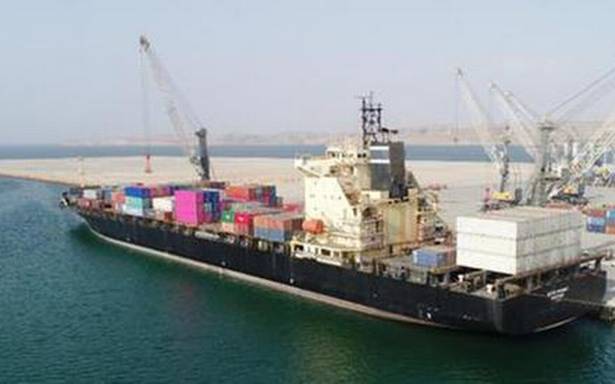 MUMBAI : India’s plan to erect four new rail mounted quay cranes (RMQC’s) or ship to shore cranes at Chabahar port has suffered a setback as crane makers stay away from participating in a tender due to sanctions imposed on Iran, forcing India Ports Global Ltd to extend the bid deadline 12 times since September last year.

While the United States has excluded Chabahar port from the sanctions list, potential crane manufacturers are not fully convinced.

The communication from the U.S on exempting Chabahar port from the sanctions “lacked clarity”, said an executive at one of the world’s top marine crane makers.

“Nobody wants to risk supplying cranes in such a scenario. Until clarity is there on exemption from sanctions, nobody will be forthcoming,” he said.

The finalization of the tender is also plagued by a transportation issue.

Two more MHC’s of 100 tonne capacity each will be suppled within a month, the official said. The MHC’s were ordered before the U.S reinstated sanctions on Iran in November 2018 after withdrawing from the nuclear deal.

As the crane maker was not willing to move the cranes from the manufacturing site directly to Chabahar port for fear of attracting sanctions, the equipment was transported on ships first to Mumbai port where it was shifted to other ships and send to Chabahar.

But, RMQC’s require special type of ships for transportation which are difficult to hire from the market due to the sanctions. And, unlike in the case of mobile harbour cranes, it is not easy to shift the equipment from one ship to another mid-way on the way to Chabahar.

If easing of sanctions gets delayed, India will have to consider “relaxing the tender terms by taking on the task of transporting the cranes directly from the origin port to Chabahar port” to attract participation of crane makers, a government official said.

By extending the tender date, India is also looking to buy time till the talks led by the European Union, and including Russia and China, to broker an agreement between the U.S. and Iran to revive the 2015 nuclear deal, fructify and help lift the sanctions on Iran.

“If and when the sanctions are eased, it will be easy for India Ports Global to finalise the crane tender,” the government official said.

But, delays in reviving the nuclear deal between U.S and Iran and easing of sanctions would further hurt the port project, which is running on an annual “short lease contract” for the last three years as the key cargo handling equipment has not been installed as per the agreement signed between Indian and Iran in 2016.