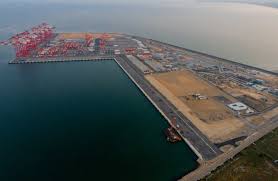 It is not clear when the payout to SLPA is being made.

The improved financial results for the six months ended June 30, 2021, comes at a time when global container and dry bulk cargo shipping costs are continuing to rise.

CMPH reported on Monday, August 30, that interim revenue increased by 38.9% from the year before to HK$5.66 billion and out of this, HK$5.31 billion was generated from terminal handling charges at port terminals, stevedoring, and the auxiliary services.

For the first half of 2021, Hong Kong-listed China Merchants Port Holdings, said that Hambantota International Port Group handled 790,000 tonnes of bulk cargo, largely as a result of rising cement volumes. Bulk cargo volume vaulted by 338.9% from the year before.

China Merchants Port Holdings, said the roll-on/roll-off terminal handled 281,000 vehicles in the first half, up by 56.2% year-on-year. This was also mainly transshipments.

The HIPG Industrial Park has signed up 27 enterprises, the company said. It is also gearing up to become a fully-functional multi-purpose port next year.

In July, China’s state news agency Xinhua, cited HIPG General Manager, Commercial and Marketing, Lance Zuo as saying: “As Hambantota Port is working towards being a fully-functional multi-purpose port by next year, we are gearing at all levels, which includes continuous training and testing our systems for optimum efficiency.”

As it reported interim earnings, CMPH said also that CICT launched a ‘Hope Village’ with a Rs 17 million community centre for Pannila, near Horana.

It donated US$21,600 to the Government of Sri Lanka to build coronavirus isolation centres and gave eight 20-foot containers to a hospital in Gampaha District, to be fitted out for use as nucleic acid testing labs. It gave US$4,500 worth of anti-pandemic supplies (5,000 N95 respirator masks) to a hospital in Hambantota; US$10,000 to Hambantota Zonal Education Office and a hospital, and an additional US$75,000 worth of PCR testing machinery to a hospital Hambantota, the company said.

In April, CICT and HIPG jointly launched the second ‘Hope Village’ project in a village in Hambantota.

On July 25, 2017, during the Ranil Wickremesinghe-Maithripala Sirisena Government, Sri Lanka agreed to sell the loss-making Hambantota Port, then condemned as a vanity project of Mahinda Rajapaksa, to CMPH. The deal also gave certain exclusive rights for 15 years to the Chinese state company, which by the end of that year had increased its assets to HK$131.95 billion. These assets include its investments.