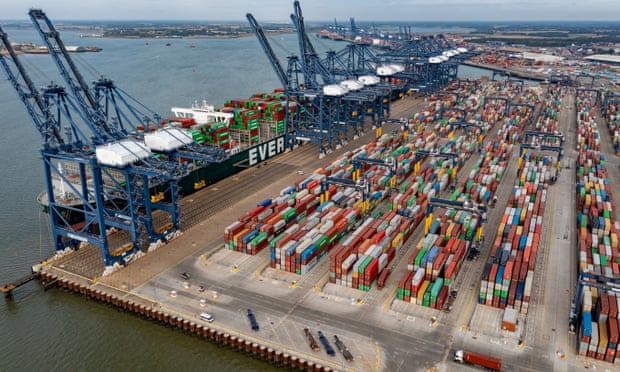 LONDON : Fears are growing about Christmas stock shortages after Felixstowe, the UK’s biggest container port, was forced to turn away ships from Asia because of a backlog of containers caused by the HGV driver shortage.

The world’s largest container shipping company, the Danish firm AP Moller-Maersk, said the Suffolk port – which handles about 40% of containers coming in and out of the UK – was among the most challenging ports in the world, after Los Angeles and Savannah in the US.

“Felixstowe has come back up as one of our challenges,” said Lars Mikael Jensen, head of east-west network at Maersk

There is a shortage of truckers in the UK. Normally after four to five days the containers are out of the terminal and into a warehouse in Birmingham or wherever before coming back empty.

“The trouble is that now we don’t have the same speed of flow of boxes moving in and out. With fewer truckers on average it takes longer to get boxes out of the terminal, so they are left standing there.”

Jensen said congestion has been building for the past fortnight and as a result, Maersk was diverting as many as one in three large vessels to dock at Rotterdam in the Netherlands, where the goods are unloaded and brought to the UK on smaller ships.

The Guardian understands there are as many as 50,000 empty containers at the port of Felixstowe, out of a total capacity of about 145,000.

Congestion at Felixstowe, which is run by Hutchison Ports, eased during the summer, despite ongoing disruption to global shipping lines and the soaring cost of containers.

However, shipping firms say delays at Felixstowe have increased again recently, and the current problems come at the beginning of the busiest period of the year as retailers import higher quantities of goods from China and the far east to sell during the Christmas trading season.

Congestion has begun to bite this year, a month earlier than in 2020, when retailers warned of problems getting hold of imported products because of gridlock at Felixstowe after the port was clogged up with thousands of containers of government-procured PPE.

In the past fortnight, Maersk and two other shipping companies – Taiwan’s Evergreen line and Evergreen Marine Corp, and French firm CMA CGM – were informed they could not leave any more empty containers at Felixstowe, which had to be diverted to other UK ports.As Britain descends into chaos, the government has put its out-of-office onRachel ReevesRead more

A spokesperson for the port of Felixstowe said: “The pre-Christmas peak, combined with haulage shortages, congested inland terminals, poor vessel schedule reliability and the pandemic, has resulted in a buildup of containers at the port. The vast majority of import containers are cleared for collection within minutes of arriving and there are over 1,000 unused haulier bookings most days.”

Felixstowe said the situation was improving and it had more space for import containers than it had had at any time since the start of July.

The spokesperson added: “We are working closely with all our shipping lines customers to accommodate their vessels. This can be challenging as a high proportion of ships are off schedule due to the well-publicised global supply chain issues and imports continue to arrive faster than the UK supply chain can handle them.”

The British International Freight Association (BIFA) trade body said its members had been dealing with supply chain disruption for more than 12 months.

Robert Keen, director general of the BIFA, said the association’s members “are working on close collaboration with suppliers to mitigate problems, including finding alternative routes to bring goods into the country, but there can be massive delays and extra costs over which BIFA members have little control”.

Shipping companies have reported increased levels of demand for goods during the pandemic, as consumers were not able to travel or spend money on experiences, so opted to buy new products for themselves or their homes.