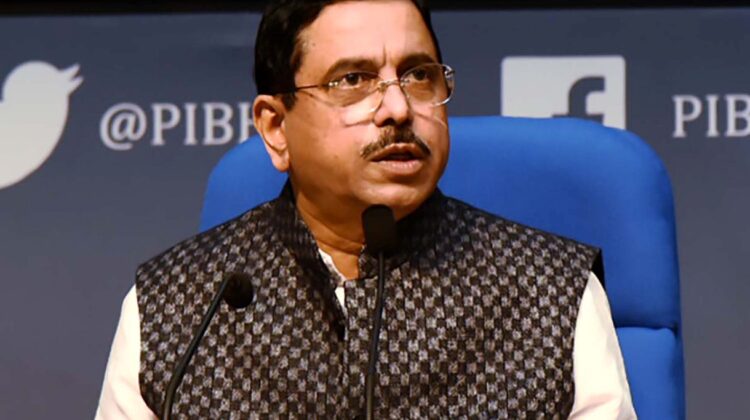 PARADIP : Asking authorities of the Paradip Port Trust (PPT) to explore the feasibility of using the port as a coal hub, Coal and Mines Minister Shri Pralhad Joshi Thursday directed officials to fully utilise the available facilities for increasing coal transportation through the sea route.

Joshi along with Minister of State for Coal and Mines Raosaheb Patil Danve, visited the Paradip Port and Mahanadi Coalfields Limited (MCL)’s Hingula area and reviewed various activities and projects. Their visit comes amid the dry fuel shortage at the country’s power plants. Both of them inspected the facilities at the port and noted that this can be developed into a coal hub.

Joshi also visited the site of the Rail Receival System near the port where coal is unloaded with the help of wagon-tipplers. He said this system of unloading is efficient, helps in saving time and demurrage charges, and also reduces the spread of coal dust.

After the review meeting, PPT Chairperson P L Haranadh said that the minister gave assurance that the government will give more opportunities to PPT for handling additional coal cargo. The coal minister later visited Balram opencast project site in the Hingula area of MCL.

“With an annual capacity of 8 MT, this mine is operated by an all-women crew for mine blasting work,” a press release issued by MCL quoted the minister as saying. While visiting the railway siding in MCL’s Hingula area, the minister emphasised the need for reducing wagon turn-around time. The interval of time between two successive loadings of a wagon is called wagon turn around. Replying to a question about the formation of another Coal  company at Talcher in Odisha, Joshi said that at present there is no such proposal and it may be considered in the future. During a review meeting at MCL, the minister verified the dispatch operations at (MCL) to enhance fuel supplies to thermal power plants. “Coal India Limited has successfully stepped up fuel supply to meet the increased power demand and arrest shortage of fuel at thermal power plants which happened due to increased cost of imported coal.

“Coal production and dispatch have now increased and we are supplying about 2.2 million tonne coal in a day to the power plants, which by itself is a record,” Joshi told reporters on the sidelines of his visit to MCL’s Hingula area in Talcher. “We are trying to further improve coal production and dispatch from the company,” Joshi said. MCL, the leading coal supplying company in the country, contributes about 25 per cent to the total coal production of Coal India. To enhance coal dispatch capacity and rapid movement of dry fuel to consumers, the company is implementing FMC (First Mile Connectivity) projects with a capital outlay of Rs 3,600 crore by 2024.

During the current financial year, MCL supplied over 94 MT of dry fuel to consumers, registering a growth of about 21 per cent over last year.