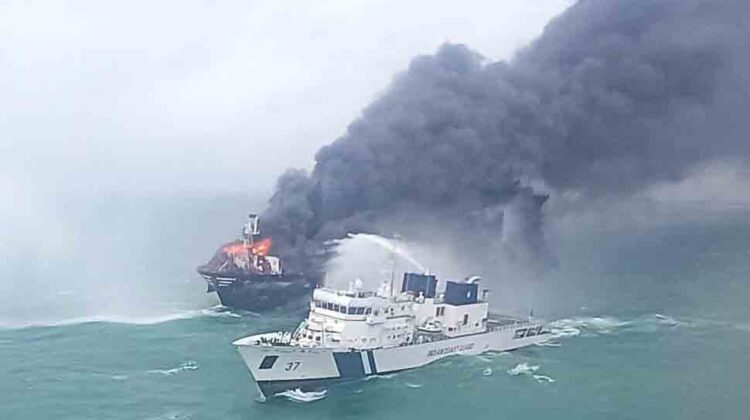 It has been observed that the vessel’s hull is intact (indicating structural stability) and that the draught/Draft remains uncharged (indicating that the vessel has not gone lower owing to increase in weight). The aerial surveillance conducted on Friday by ICG Dornier aircraft does not revel any oil spill.

Efforts of ICG vessels Vaibhav and Vajra, assisted by Sri Lankan tugs has restricted the flames to the rear portion of the ship, while white fumes are emanating from the mid portion. The emanation of white fumes from the mid-region possibly mean the lack of available combustible material. By preventing the fire from re-spreading to the forward portion of the ship, the anchor-chain link has been prevented from parting.

Amid the challenges posed by rough seas and strong winds, the ICG vessels are making multiple runs along the length of the affected ship for spraying water and foam at high speeds. It is crucial to also maintain adequate distance owing to the dangers posed by burning containers or mangled parts that my fall off the burning ship.

Besides, 1486 containers of chemicals and other hazardous International Maritime Dangerous Goods Code(IMDG), the vessel contains 322MT of fuel. To augment the firefighting and deal with a possible oil spill, ICG Pollution response vessel Samudra Prahari is expected to reach the location on Saturday.

It was on 20th May, Thursday that a fire first broke out on the said ship, following which it was brought under control by Sri Lankan Port authorities by the next day. However, on Tuesday morning(25th May),the fire and explosions started recurring and owing to rough weather nearly 10 containers are said to have fallen overboard.