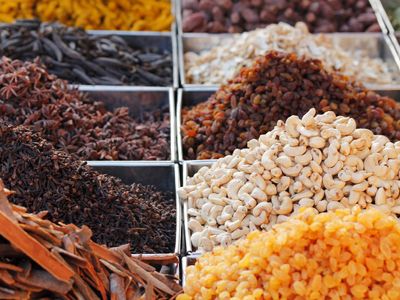 NEW DELHI : Traders of dry fruits and spices in Mumbai and Delhi seemed relieved as consignments of raisins, small pistachios, apricot, figs, asafoetida and shah jeera from Afghanistan that were lying in transit at the Wagah border have arrived in the market after the Indian government gave clearance.

Though the consignments comprise only small quantities of dry fruits and spices, those will still help meet demand during the upcoming Ganesh Chaturthi and Navratri festivals.

“Following the Taliban takeover of Afghanistan, we were unsure whether the dry fruits that were in transit will at all arrive in the Indian market. But fortunately, the consignments have arrived and we are able to cater to the market,” Vijay Kumar Bhuta, president of the Bombay Dry Fruits and Date Merchants Association, told.

Asafoetida, commonly called hing, is brought in raw form from Afghanistan and then processed here for consumption.

Afghanistan has witnessed bumper dry fruit production this year and exporters are in constant touch with Indian buyers despite the current situation in that country, importers here said. Exports of dry fruits and spices from Afghanistan start in September, just before Diwali and the festive season in India. This is the time when companies too start buying dry fruits for the gifting purpose.

Being a signatory to the South Asian Free Trade Area, imports from Afghanistan enjoy duty concessions in India with a maximum tariff of 5% against 30-40% on consignments from other countries. Importers hope that the Indian government will work out some trade-related deals with Afghanistan to ensure a smooth flow of dry fruits and spices during Diwali, when the demand is the highest.

“It is unlikely that the Taliban will put any curbs on exports of dry fruits to India as it is a major revenue earner for the country. We have to see what stand our government takes in the coming days. Diwali is still more than a month away and there is enough time for negotiations,” said Bhuta.

Prices of dry fruits have gone up 10-15% in the last fortnight, after the Taliban took control of Afghanistan.

Importers said the Afghan crisis may raise dry fruit prices in India, but it is unlikely to have a severe impact on the trade in the long run, as consignments can be routed through Singapore, Dubai and elsewhere.