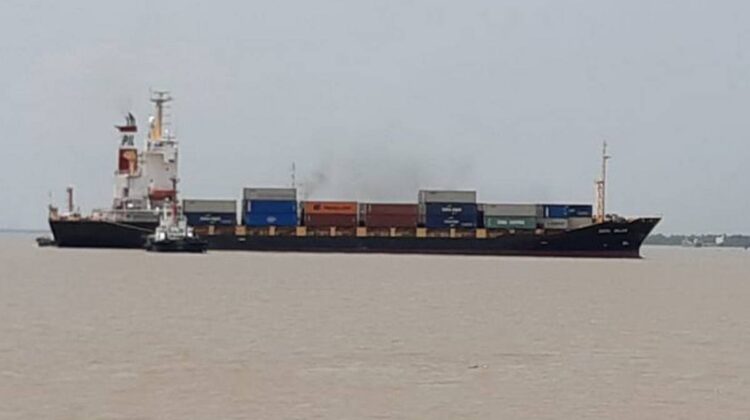 According to Vinit Kumar, Chairman, Syama Prasad Mookherjee Port, Kolkata, there has been “no major impact” on trade. The secondary channels were opened to allow other vessels to come in during the period when refloating operations were on.

“The forward part of the vessel, Kota Rajin, had run into the shore and had embedded there. It was refloated on Sunday afternoon,” he said.

Earlier, on Friday, a small container ship ran aground at the Syama Prasad Mookerjee Port Trust, mirroring the grounding of a huge container vessel in the Suez Canal in late March which caused a maritime traffic jam and disrupted global trade.

A 600-twenty-foot equivalent units (TEUs) capacity vessel, was heading for SPM Port when it swayed away from the shipping channel, probably due to a steering fault. It, then, ran aground in the Falta stretch, partially blocking the channel and restricting movement of ships to the port.

The port authorities opened-up another channel for shipping, but deep draft ships cannot navigate through it.

The Falta channel has been witnessing unexpected shoaling in the past couple of months, reducing the channel’s depth.

On Saturday, the port authorities removed the sedimentation in the area with the help of excavators and moved the ship that was stuck to the shore.

“The ship is still in the channel. When the tide rises in the river, the ship will sail out,” an official said.

The incident has restricted the number of ships using the channel to go in and out of the port for loading and unloading cargo. Currently, three ships are waiting to enter the port.

“Though a new channel has been opened up, it cannot accommodate deep draft ships,” the official said.

The unexpected shoaling in the Falta stretch has raised concern for the port authorities and the shipping industry.

The depths at Kolkata Dock System (KDS) are lower during the winter season and the lean draft season extends from late November to February every year.

“But, this year, there was a rare occurrence of sudden shoaling at Falta stretch of the shipping channel,” Chairman Vinit Kumar told stake holders in an April 16 letter.

“This was an abrupt phenomenon and could not be predicted. As a result, draft cuts of 0.2-0.3 metres had to be made and the lean draft season extended beyond February to March,” Kumar said.

To overcome this, the port immediately deployed additional dredgers and a secondary channel was opened-up for shipping.

“Gradually, the draft cuts have been withdrawn and I further assure the shipping community that drafts at KDS are already back to normal. We are constantly monitoring the channel and hope that there will be further improvement in the river drafts in the coming months,” Kumar said in the letter noting that the port is looking to grow its cargo traffic and facilitate users through infrastructure upgradation and ease of doing business measures.