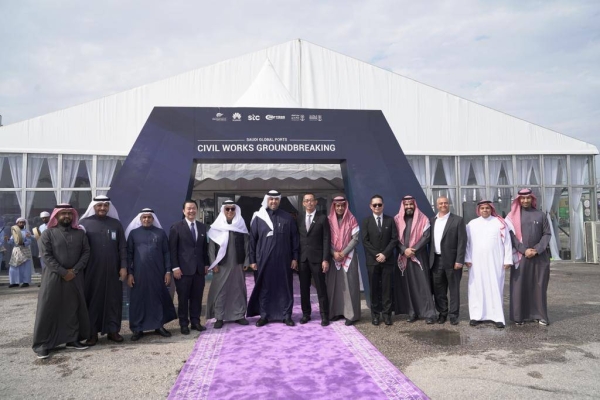 RIYADH : The Saudi Ports Authority (Mawani) has announced the laying of the foundation stone for upgrading and developing two container terminals at King Abdulaziz Port in Dammam under the Build-Operate-Transfer (BOT) concession signed with Saudi Global Ports (SGP) valued at over 7 billion riyals.

The project is set to take the national maritime regulator a step closer to realizing its Saudi Vision 2030-inspired roadmap centered around optimizing port operations and modernizing infrastructure to build a booming and sustainable maritime ecosystem while fulfilling the aspirations of the National Transport and Logistics Strategy (NTLS) to position the Kingdom as a global logistics destination connecting three major continents.

The concession will work on refurbishing berths and facilities across the Port’s first container terminal besides expanding berths and overhauling the container yard within the second container terminal to enable the Arabian Gulf hub to handle giant containerships. The development works will also add a custom-built sandbox to test cutting-edge technologies and conceptualize new processes before going online.

Apart from generating over 4,000 jobs in the local economy, the project is expected to raise the Port’s overall capacity by 120% to 7.5 million TEUs and strengthen the nation’s supply chains, boost its foreign trade, and improve the Kingdom’s rank in global indices.

As part of its long-term developmental strategy to deploy 160 high-impact projects at a total cost of over 4 billion riyals, Mawani is keen on partnering with leading industry players to transform Saudi ports into engines of growth and investment in the shipping and transportation sectors.

2022 represented a monumental year for King Abdulaziz Port in Dammam and its operator SGP with record-breaking annual performances across various indicators yielding the Port’s highest container throughput in its history at over two million TEUs.