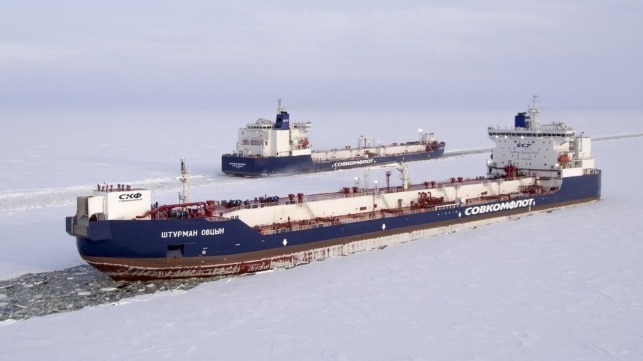 DUBAI : Russia continues to develop shipping through the Arctic promoting it as a faster route that is an alternative to the Suez Canal. In the latest development, ROSATOM, the Russian nuclear energy company that is the infrastructure operator of the Northern Sea Route announced a cooperation agreement with DP World for a pilot container shipping project using the NSR. The two companies will work together to develop and test the infrastructure to support cargo to be transported through the Arctic between Northern Europe and East Asia.

“DP World supports Russia’s efforts to diversify trade flows between Asia and Europe,” said Sultan Ahmed Bin Sulayem, Group Chairman and CEO of DP World. “DP World has already committed to invest $2 billion with the Russian Direct Investment Fund, and we will continue to work with our partners in Russia to find solutions that allow the Northern Transit Corridor to develop sustainably.”

According to ROSATOM, the Northern Maritime Transport Corridor (NMTC) is being created in stages on the basis of the Northern Sea Route under the NSR Infrastructure Development Plan 2035 approved by the Government of the Russian Federation. ROSATOM said that it will develop a new logistics business to support the next stage of development of the route.

“Building sustainable transport infrastructure in the Arctic opens up new opportunities in developing the Eurasian transit, which can be carried out in the optimal time frame and help reduce the environmental footprint through shorter routes and the advanced low-carbon energy solutions applied,” said Alexey Likhachev, Director General of ROSATOM.

Environmentalists have been critical of Russia’s efforts to build Arctic shipping and promoting the environmentally sensitive region to commercial shipping. Today’s announcement was made during an event in St. Petersburg billed as Arctic Day to “bring together stakeholders to talk about the best ways to develop the Arctic sustainably.”

Russian authorities also used the opportunity to highlight the growth in shipping in the region in 2021. They reported that since the beginning of the year, cargo traffic on the NSR rose more than 2.5 percent to over 17 million tons. So far in 2021, they have issued permits to 640 vessels up from just over 500 a year ago to operate on the North Sea Route. Most of the traffic on the route is related to exports of LNG and gas condensate from the NOVATEK’s terminal in Sabetta, but the authorities noted that 87 foreign flagged ships received permits for the route in 2021.