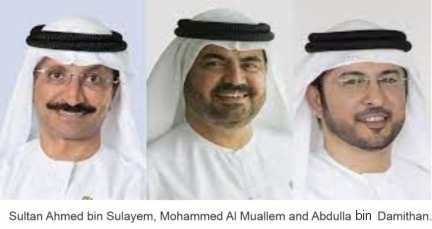 DUBAI : Dubai’s Global Ports Operator DP World, coming off an impressive 2020 that has been sustained at the start of this year, on Saturday announced a transition in top management as Mr. Abdulla Bin Damithan was appointed CEO and Managing Director of DP World, UAE Region and Jafza, taking the reins from Mr. Mohammed Al Muallem, who has been promoted to Executive Vice President of DP World.

During his 20-year career at DP World, Bin Damithan has held leadership positions with increasing responsibilities, the most recent being Chief Commercial Officer for the UAE Region. As an accomplished leader in the maritime and logistics sector, he has led different aspects of the business to commercial success, including ports and terminals; parks and zones; and trade enablement solutions.

Mr. Sultan Ahmed Bin Sulayem, Group Chairman and CEO of DP World, said: “DP World has been integral to Dubai’s economic success story, contributing more than a third of gross domestic product. Jebel Ali Port and Jafza account for nearly a quarter of all foreign direct investment into Dubai and support 135,000 jobs. I am confident that the leadership of Abdulla Bin Damithan will take DP World, UAE Region to the next level of growth. I would like to thank Mohammed Al Muallem for his pioneering work and look forward to continuing to work with him closely.”

Mr. Abdulla Bin Damithan said “In my new role, alongside my accomplished colleagues, we aim to expand DP World, UAE Region and increase our contribution to Dubai and the country. I am looking forward to utilising my experience in the company to create unparalleled solutions that support sustainable socio-economic growth, and also to cement DP World’s position as a leading smart trade enabler. I am taking responsibility for a business in robust health. Over the years, I have had the privilege of working under the leadership of Mr. Sultan Ahmed Bin Sulayem and Mr. Mohammed Al Muallem, and have learnt about the fundamentals of business in the region and around the globe.”

Having served the company for over 38 years, Mr. Mohammed Al Muallem is known for his passion for the business and immense knowledge that has proved invaluable to the success of DP World. Following his promotion to Executive Vice President, he will work closely with the Chairman of DP World providing executive leadership to the company globally. He will also be responsible for DP World’s marine-based assets in the UAE, including Dubai Drydocks World, Dubai Maritime City and P&O Marinas.

“I have had the privilege of leading DP World, UAE Region and I am proud of relentless work our team has put in to build a better company and a better world and the positive impact we have made on the economy of Dubai. As I assume this new position, I would like to thank Mr. Sultan Ahmed Bin Sulayem for having the confidence in me. I would also like to express my gratitude for the support the wise leadership of Dubai has shown us through the years,” said Mr. Mohammed Al Muallem.

“This has further helped us achieve great success in the emirate and contribute to its thriving economy. The new position will bring with it numerous challenges, however, I will continue to stay committed to my goal of leading the organisation and our subsidiaries to newer heights. Moreover, it is an honour to be passing the baton to a strategic leader like Mr Abdulla Bin Damithan, who has contributed to our strong financial performance and the execution of key initiatives that resulted in substantially improved profitability and expanded margins.” Mr. Mohammed Al Muallem added.