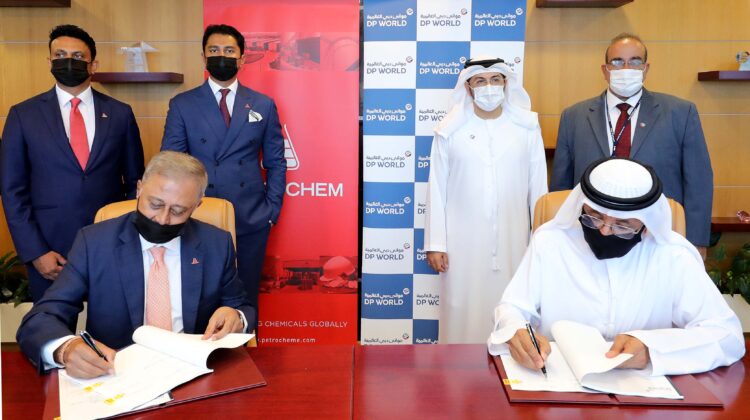 DUBAI : DP World, UAE Region, the leading smart trade enabler, and Petrochem Middle East, the largest chemical distributor in the Middle East and Africa, have signed a 30-year lease agreement that expands its business in the region.

Petrochem Middle East will invest between US$80 million to US$90 million in developing a chemical terminal on Quay 7, adjacent to the dedicated chemical handling berth within Jebel Ali Port.

Abdulla Bin Damithan, CEO & Managing Director, DP World – UAE Region and Jafza, said, “The UAE and the Middle East region for years have been recognised as a thriving hub for the petrochemical industry. Despite the highly unstable market due to the pandemic, over the course of 2020, the GCC’s chemical output expanded by 1.5 per cent compared to a global decline of 2.6 per cent. These figures showcase the resilience of the sector and the potential it has. Our partnership with Petrochem Middle East and our long-standing relationship with the company is further proof of the burgeoning sector. The petrochemical industry is a priority sector for the country and the region. Whereas Jafza, due to its location, is a strategic access point to the Middle East, Africa and South Asia, contributing around 70 per cent of the UAE’s foreign trade in petrochemical products.

DP World, UAE Region’s trade and logistics hub including Jebel Ali Port and Jebel Ali Free Zone (Jafza), has contributed for years to the region’s chemicals’ trade and logistics with its state-of-the-art ecosystem. While the port supports more than 10,000 chemical manufacturers and traders, the free zone has a petrochemical cluster that spreads over an area of four million sqm, housing over 500 petrochemical companies that employ over 6,500 people. In addition to container terminals with 22.4 Mn TEU capacity, the Jebel Ali port that has 11 berths, also features a liquid bulk terminal, spread across two million sqm.

The facility is expected to be completed by the third quarter of 2023 and will provide chemical raw materials in large volumes to traditional and new industries coming in the UAE. In its peak capacity, the terminal will have a capacity of approximately 40,000 CBM for storage of various products and will also be fitted with distillation and processing units. It is likely to contribute annually to upwards of USD200 million of new trade to and from Dubai thereby contributing to the DP World Trade Bridges and the 2 trillion project.

Yogesh Mehta, CEO, Petrochem Middle East, stated, “Since our inception in Jafza, we have had the privilege of having an ideal business environment that has truly added to our growth figures. Today, our annual turnover is over AED2.5 billion and with the new project, we are expecting short term and long-term gains of about 10-15 per cent of our investment. Our existing state-of-the-art Jebel Ali terminal has helped us strengthen the portfolios of our clients, while helping us offer prompt logistics services and specially blended quality products. As quality is our key area of concern, our terminal adheres to the strictest of health and safety norms and is also environment friendly. We owe part of our success to Jafza as it has helped us position ourselves as the largest independent chemical distributor in the Middle East and the 11th largest in the world. We are certain that the agreement will bring about a positive shift in the industry that is known for its rapidly changing regulations, new introductions of technology disruptions and evolving customer demands.”

Petrochem Middle East has been a part of Jafza since its inception in 1995. This is the second distribution and storage terminal in Jebel Ali and the fifth in the world. With this project, Petrochem proposes to build 24-30 bulk chemicals storage tanks of different size large and small and some stainless-steel tanks with an overall capacity of 40,000 m3. It also includes a day tank farm, tanker and truck loading facility, nitrogen generation plant and automatic drum filling machines.