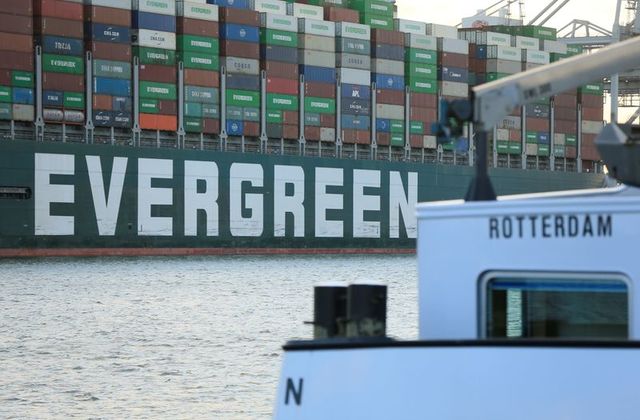 ROTTERDAM : The huge container ship that blocked the Suez Canal for nearly a week earlier this year finally reached the port of Rotterdam in the Netherlands on Thursday to begin unloading its cargo.

It was scheduled to dock at Rotterdam’s ECT Delta terminal for unloading until Aug. 3 before departing for Felixstowe, England, the port said.

The vessel, one of the world’s largest container ships, became jammed across the canal in high winds on March 23,halting traffic in both directions and disrupting global trade.

As dawn broke over the sprawling port, the Ever Given eased into the Amazonehaven container terminal months later than originally planned.

The Panama-flagged vessel was heading for Rotterdam when it plowed into the sandy bank of a single-lane stretch of the canal about 6 kilometers (3.7 miles) north of the southern entrance, near the city of Suez on March 23.

A massive salvage effort freed the skyscraper-sized vessel six days later, allowing a traffic jam of hundreds of waiting ships to pass through the canal.

Earlier this month, the Ever Given left the canal”s Great Bitter Lake, where it had been held for over three months amid a financial dispute. It was freed to continue its voyage after the ship”s Japanese owner, Shoei Kisen Kaisha Ltd., reached a compensation settlement with canal authorities following weeks of negotiations and a court standoff.

The Dutch port said the vessel is expected to remain in Rotterdam until Aug. 5, when it will head for the English port of Felixstowe.