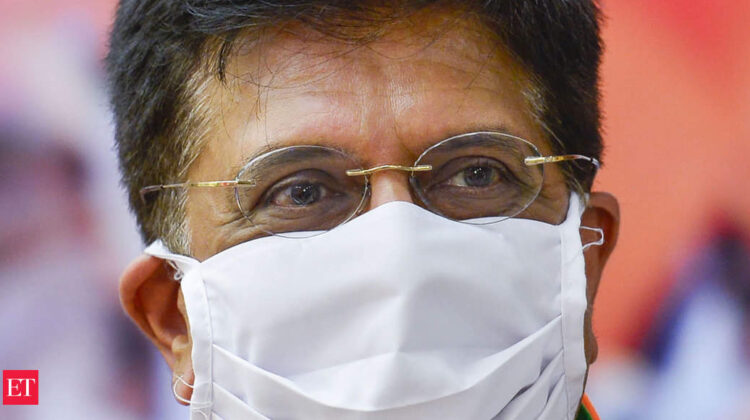 NEW DELHI : At a meeting with export promotion councils, issues related to high input costs due to rising prices of steel and plastics, release of pending refunds under export incentives and extension of interest subvention scheme for one year.

Commerce and Industry minister Piyush Goyal on Tuesday said that India’s merchandise exports can reach $400 billion in FY22 as there is a large potential for enhancing exports in several sectors like pharma, engineering ,auto-component ,fishries,and agro-products. At a meeting with export promotion councils, issues related to high input costs due to rising prices of steel and plastics ,release of pending refunds under expert incentives and extension of interest subvention scheme for one year.

He said that the performance of exports in April 2021 and 2020-21 gives hope that this year an ambitious goal of merchandise exports worth 400 billion dollars can be achieved,” the Ministry of Commerce and Industry said in a statement.

India’s merchandise exports in April were $ 30.21 billion, an increase of 197.03% over $ 10.17 billion in the same period last year and an increase of 16.03% over $ 26. , 04 billion in April 2019. Industry representatives who attended the meeting said the minister also lobbied for a swift resolution of differences between the commerce department and the finance ministry over the remission of tariffs and taxes on exported products (RoDTEP) whose rates have not yet been notified although the scheme was implemented in January.

“Rising prices for raw materials, especially steel and plastics, was an area of ​​concern and the industry was asked to remain vigilant against any increase in input costs,” said a representative of a council. promotion officer who attended the meeting.

According to another representative, high freight costs and persistent container shortages were other key issues addressed at the meeting.

“It was a balance meeting and the ministry pushed for the early disbursement of the benefits of the India Services Export Scheme for 2019-20,” the source said, adding that a new economic package could offer some incentives for the export sector. from the country.
The Federation of Indian Export Organizations has said that exporters have yet to receive tax refunds of around Rs 40 billion under the Indian Goods Export Scheme as they were not allowed to file their claims in under the scheme as of April 2019.

Exporters also sought to have exports included in essential services amid the Covid-19 pandemic, as localized closures, especially in Maharashtra, would lead to factories being closed for the next fifteen days.