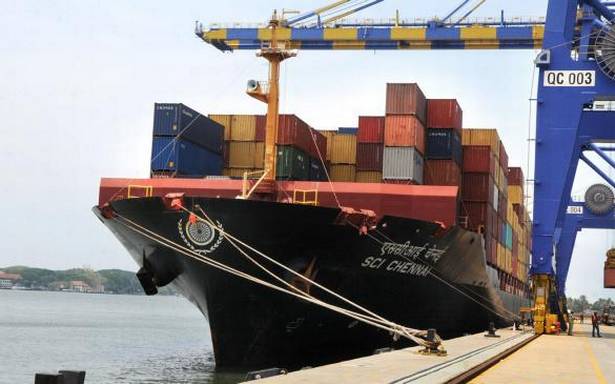 NEW DELHI : Addressing the container shortage and consequent surge in freight rates, Federation of Indian Export Organisations (FIEO) on Monday noted how the freight rates had skyrocketed from the pre-pandemic period. A 40-feet container to the United States before Covid, it stated, was costing $2,000 and now it is priced between $6,200 and $6500.

Similarly, for Europe the cost was $1,200-$1500 earlier, which has gone up to $5,500. “While freight increase is a global phenomenon, we may be suffering more as we have a fairly large MSMEs in exports, who have very less negotiating power. We require an Indian shipping line of global repute in the country,” FIEO said in its statement.

It further stated that a large shipping company in India was the need of the hour since we remit about $65 billion every year as the transport charges overseas and yet remain at the mercy of foreign shipping lines.

The export organisation also urged the industry and government to increase their marketing budget for exports, saying that a big push can come from FTAs with major trading partners like the US, UK and EU. “Such FTAs will help in attracting FDIs particularly those looking at both the Indian markets and exports. One of the reasons for the success of Vietnam, in attracting investment and relocating units, is its effective FTAs with the rest of the world,” A Sakthivel, President, FIEO stated.

Stressing how the government is aiming at an export of $400 billion in the current fiscal, Sakthivel added that even though this looks ambitious, it is certainly achievable. “Such a target requires aggressive marketing strategy and venturing into new markets. My priority will be export promotion. I will create an export promotion cell to identify new markets and new products. I will coordinate with all councils for product development and export promotion,” FIEO Chief highlighted.

Under additional marketing efforts, he urged the government to look into enhancing Market Access Initiative funds from the current level of Rs 200 crore. “Alternatively, a planned scheme for marketing aimed to take exports to $1 trillion in next five years may be rolled in with a minimum corpus of Rs 1000 crore annually,” he said.

Exports have shown a positive trajectory in April and May, giving hope for a good momentum to continue this year despite Covid’s second wave that ravaged the nation. While India’s exports in April were recorded at $30.63 billion, in May exports grew 67.4% to $32.2 billion versus last year.

Drawing attention to growth in agriculture exports and sunrise sectors like electronics, machinery, pharma, networking products being a bright spot, Sakthivel said India’s focus on organic and value added exports will help agri exports. “The Production Linked Incentive (PLI) Scheme will help the sunrise sectors as investments have started flowing in. We will build a production base in the country in the next 2-3 years to augment our exports,” he added.

The industry body also expressed its commitment to promote services exports which have had an encouraging graph during the pandemic, with digitization helping the IT & ITES. “While retaining our current position in software, we need to push other services as well. 12 Champion sectors, identified by the Government, require an enabling ecosystem to thrive and FIEO would be working with the Government in this direction. Our hospitality and aviation sector require little more hand holding, being the worst victim of the pandemic,” he said.