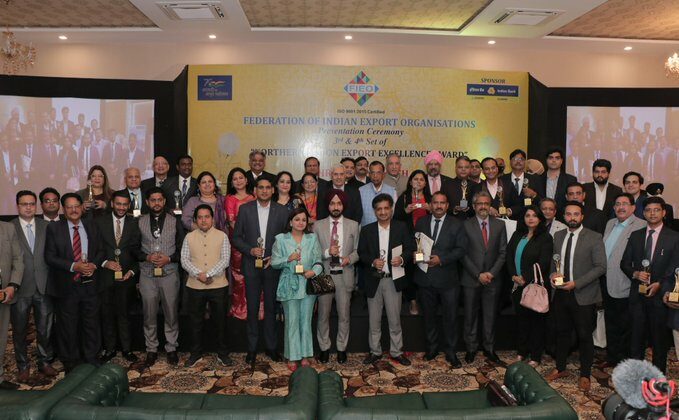 NEW DELHI : In order to encourage the exporters and have an intrinsic growth FIEO instituted the Regional Awards which is given at the state level to exporters who have excelled in their respective fields and states. The states of Northern India play a significant role in India’s Total exports and FIEO felicitated the top performers in various categories from this region at the Northern Region Export Excellence Awards on November 13, 2021 at Jalandhar. The Awards were given by Shri Som Parkash, Hon’ble Minister of State for Commerce & Industry; Shri Suvidh Shah, Jt DGFT; Shri Khalid Khan, Vice President, Shri S C Ralhan, Past President and Shri Ashwani Kumar, Regional Chairman (Northern Region), FIEO.

Shri Khalid Khan, Vice President FIEO in his address congratulated all the Award winners and mentioned that by their excellent performances they have become role models for the entire exporting fraternity. Indian exports have done exceptionally well in the first 7 months of the current fiscal touching a new high of US$ 233 billion. Such a performance is all the more remarkable as it has come at a time when many States had local lockdown and huge challenges were witnessed in logistics. This has all been possible with the professional approach of exporters and support the Government has extended from time to time to the exporting community. Going by the current trend, we are confident to achieve the target of USD 400 billion with exemplary performers amongst us.

Shri Ashwani Kumar, Regional Chairman (Northern Region), FIEO in his welcome address thanked Shri Som Parkash, Hon’ble Commerce & Minister. He informed that the Export Excellence Award is awarded to member exporters for achieving outstanding performance in export of goods and services and to organizations helping exporters in achieving higher growth in all the Northern region states, such as Delhi, Himachal Pradesh, Punjab, J&K, Uttarakhand, Chandigarh, Uttar Pradesh, Haryana and Rajasthan. He said that we are on our course to achieve the target of US$ 400 Billion in goods exports this fiscal and now working for reaching the milestone of US$ 1 Trillion merchandise exports by 2026-27.

Shri S C Ralhan, Past President, FIEO raised the issue of GST and highlighted the blockage of working capital due to the amendment in the GST law. Talking about bank loans he said that banks are scared of giving loans to exporters and about decline in loans /funds to the exporters. He said that this was the best time for exports and said that if banks made funds available to the exporter, the exports that were at USD291 billion at present would surpass the target of USD 400 billion.