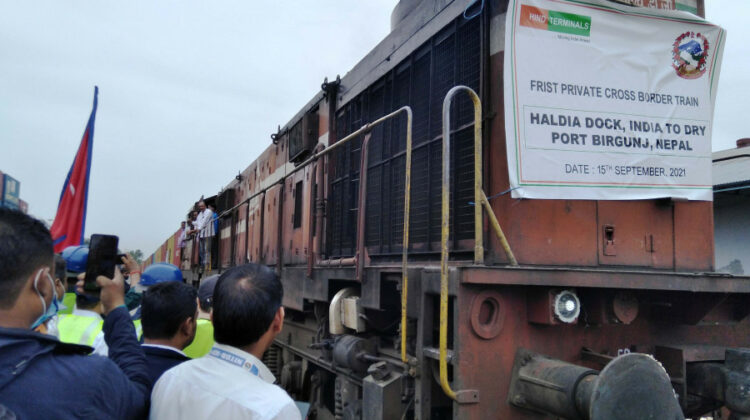 The cargo train arrived in Birgunj, a bordering town in Nepal, on Wednesday morning. The one-rack cargo train of Hind Terminal Pvt Ltd arrived at the Birgunj-based dry port at 10:00 am, according to the Nepal Intermodal Transport Development Committee.

The revision of the 17-year-old railway service agreement has removed the bottlenecks that Nepal has been facing for long, particularly in the import and export of goods through the Indian Railways freight services.

According to the revised text of the Letter of Exchange, all authorised private container train operators (Indian as well as Nepali) will be able to utilise the Indian Railways network to carry freight containers for Nepal’s imports or exports, ending the monopoly of the Indian government-owned Container Corporation of India (CONCOR) after a hiatus of 17 years.

The agreement allows India’s Railways freight services to bring goods to and take goods from other border points besides Raxaul/Birgunj.

The Executive Director of the Committee, Ashish Gajurel, said that the train carrying 90 containers of food products from Haldia arrived at the dry port . Gajurel shared that the Hind Terminal Pvt Ltd would import cargo twice a week while other four companies have also shown their interest in cargo transportation.

The number of cargo companies for transportation might be increased as the private sector managed cargo trains are allowed for the same.

The railway service agreement signed between Nepal and India in 2004 had established the monopoly of the Container Corporation of India, a sister organisation of Indian Railways.

As Nepal and India are planning to extend more cross-border railway networks, experts and officials said this agreement has opened new vistas of cooperation in Nepal-India trade and transit sectors.

With this agreement, Indian private operators can transport Nepal-bound cargo from Visakhapatnam and Kolkata ports as well as more ports allowing Nepal to use Indian sea ports closer to major customs points of western and far-western Nepal for third-country trade, as per the Transit Treaty between Nepal and India. At present, rail cargo can be transported only on the Kolkata-Raxaul/Birgunj route.

The liberalisation will particularly reduce transportation costs for automobiles which are carried over special wagons that were not listed in the railway service agreement of 2004, as they did not exist back then, according to the officials.