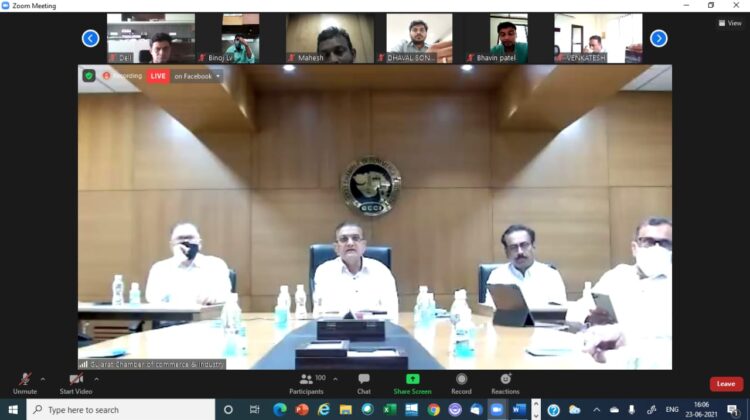 AHMEDABAD : Gujarat Chamber of Commerce & Industry (GCCI) and Gujarat Dyestuff Manufacturers Association (GDMA) organized a webinar for their members to create awareness of land movement by Rail to Bangladesh from ICD Khodiyar. The webinar was conducted on 23rd June, wherein 100+ members participated to understand the customs cleared export shipment by Rail to Bangladesh from their hometown.

In a welcome address, Mr. Natubhai Patel, President, GDMA cited that “Bangladesh is one of the rising countries, in not only in Asia but in the world today, being a young country only 50 years, remarkable progress in sustainable economic growth has happened in last decade. Readymade garment and frozen sea food have attracted lot many countries to import from Bangladesh. The trade between two countries India and Bangladesh is approx. USD 10.0bn. including exports worth USD 8.50 bn with various products which includes Cotton bales, rice, sugar, machinery, organic chemical, pharma, plastic, leather etc. India is also importing worth USA 1.3 bn in return, mainly edible oil, garments made-ups, Hydrogen peroxide, caustic live etc, because energy cost is almost 50% that of in Indian. Bangladesh is important for the exports of Dyestuff material, pharma, rice, plastic granules from Gujarat, Sugar from Maharashtra and organic chemicals from both the states.”

He emphasized on Rail-road movement to reduce the logistics cost, improve speedy delivery and to avoid the Chittagong boarder hurdles and welcomed CONCOR dignitaries to inform about exports through Rail to their members for win-win situation.

Mr. Madhukar Roat described about CONCOR’s first train movement from Gujarat, moved with chemical cargo of M/s. Prakash Chemicals International Pvt Ltd which were loaded in CONCOR owned containers from ICD Ankleshwar on 11th June. The containers were cleared from Customs at ICD Ankleshwar itself and the train moved to Majerhat Terminal of CONCOR at Kolkata for further movement to Benapole.

CONCOR has 20 ft Side Access (SA) containers from which cargo can be directly offloaded at Benapole while on wagon only. Mr. Roat explained its benefit of movement by rail – clearance & documentation at ICD Ahmedabad, Sealed with e-seal ‘ECTS’ by CBIC, CONCOR’s huge inventory of empty containers at ICD, time and cost saving, trace & track system.

He added, the awareness of such movement is less in the Ahmedabad market and, therefore, he appreciated GCCI and GDMA for organizing such webinar for sharing all the information pertaining to export to Bangladesh to Benapole.

Mr. Vaasudeva Rao pointed out the benefits of movement of export by rail against the export via Chiatagong port, which is already operating 6-7 times beyond its capacity leading to holding of vessel, containers at CFS, congestion on road-route leading to border waiting time and higher cost.

Mr. Rao further emphasised that India is adopting multi-pronged strategy to enhance trade and business partnership with Bangladesh, when China is strategically trying to woo Dhaka with its duty-free access to its product. He further added that Bangladesh is one of the 10 largest export destinations for India with $ 9.21 billion. The major export commodity that are moved by CONCOR are Cotton, Vehicles, Minerals, fuels, nuclear reactors, Iron & Steel, cereals, electrical equipment, Plastic articles, etc

CONCOR has started Bangladesh movement in April 2018 from North to Bangabandhu station in Bangladesh and moved around 11 trains with 60 TEUs each train, during the pandemic period. Mr. Alok Badkul clarified the process of movement from their CFS Majerhat in Kolkata to Benapole and potential of exports from Gujarat.

CONCOR complimented the efforts made by the GCCI and GDMA for creation of this awareness and also appreciated the interest of Gujarat trading community in the business.