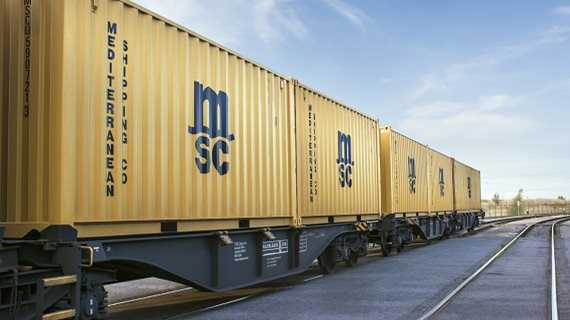 GENEVA : In mid-May, the first shipment of MSC containers was moved via MSC block train from Vostochniy to St. Petersburg in Russia, as part of a new regular multimodal solution from Asia to Europe, which was launched in April.

In recent years, a growing number of shippers have been moving containers from east to west over land, including a surge in cargo originating in China bound for Europe via rail. Against the backdrop of this trend, MSC launched the Taiga service, which combines MSC’s intra-Asia shipping network, our rail service in Russia and our short-sea feeder network in Europe. One single package offers connections from China, Korea and Japan all the way to various locations in North West Continent, Europe

From Asia, cargo is shipped on MSC’s Golden Horn and Sunrise services to two of the largest container ports in Russia: Vostochniy and Vladivostok. The cargo is then transported via MSC block train to St. Petersburg in 13 days and can then be transshipped via MSC’s Maroc Express and Baltic Loop 7 services to other North-West Continent and northern European ports such as Antwerp, Bremerhaven, Rotterdam and Le Havre in four to seven days.

“Customer response for this new solution has been very positive, and the volume is currently high enough so we can run dedicated block trains to St. Petersburg, instead of relying on existing rail schedules. This means added flexibility for our customers, which is much appreciated in these challenging times,” said Salvatore Scotto di Santolo, Trade Manager at MSC’s headquarters in Geneva, Switzerland.

Total transit time for shipments from Shanghai to St. Petersburg is 24 days via this combined solution of ocean and rail, compared with 41 days by ocean freight. In addition, the usage of rail service is highly stable as it is not so impacted by weather conditions, increasing the reliability of the offering.

In 2020, China became the EU’s largest trading partner and exports from China to the EU grew by 5.6 per cent compared with 2019, according to data from Eurostat, the EU’s statistical office.

While MSC continues to offer traditional ocean network coverage via our usual 2M services, the Asia-to-Europe multimodal solution is an attractive additional alternative proposition for shippers who are facing issues with getting space on ocean freight services due to the Suez Canal blockage incident in April and on-going port congestion in Europe stemming from the pandemic.

Furthermore, there is room for this transport option of moving cargo overland via Russia to scale up, with MSC’s commitment to avoid considering the Northern Sea Route through the Arctic due to environmental concerns.