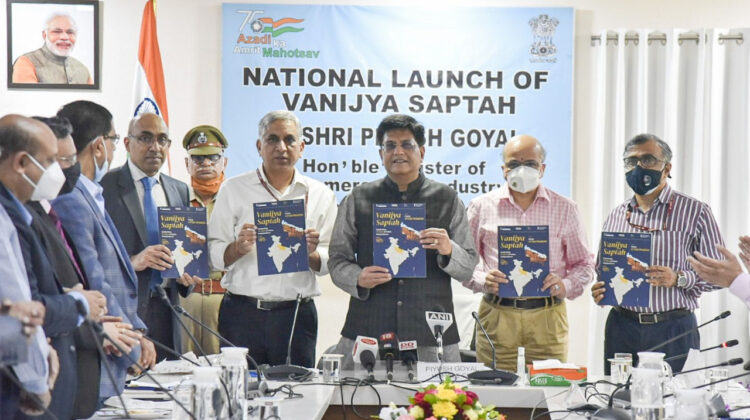 NEW DELHI : Government is going to institutionalise a 24 hours “Helpline” for assistance to exporters and resolution of issues , said Shri Piyush Goyal on Monday at the launch of nation wide celebrations of iconic week for Amrit Mahotsav for Commerce & Industry Ministry.

Shri Goyal said that Uttar Pradesh has made a commendable progress in Industrial growth and Exports Improvement in Law and order has made doing  business and trade much easier and safer in UP.

He added that there was  need to jointly  create a road map for next 25 years and contribute to make India a world leader .

The Minister said that reforms in social sectors have made the development wholesome. Path breaking Expansion of health programs, Toilets Infrastructure have been a major success and made the devlopment inclusive.

Shri Goyal said that  PM Modi’s call for ‘Azadi Ka Amrit Mahotsav’ is a tribute to our freedom fighters & freedom movement and  it is an opportunity for us to inspire & reignite new fervour, exuberance & enthusiasm

Ministry of Commerce & Industry has curated Vanijya Saptah has been around the 5 pillars of Azadi ka Amrit Mahotsav i.e. Freedom Struggle, Ideas @ 75, Achievements @ 75, Actions @ 75 and Resolves @ 75.

Some of activities planned during this week include –

Shri Goyal added that 75 years ago all worked to get Swarajya, now all must work in mission mode to be Aatmanirbhar. Modi Govt as a facilitator of this mission has introduced several reforms for inclusive growth.

The Minister for Commerce & Industry, Textiles, Consumer Affairs, Food & Public Distribution said that Centre has taken a series of measures to give further impetus to growth and job creation like Reduction in Corporate Tax, Liberalisation of FDI Regime, Single Window Clearance, ODOP, etc.

Shri Goyal added that despite COVID-19, due to decisive & bold leadership of PM, our economy is reviving and exports are increasing significantly.