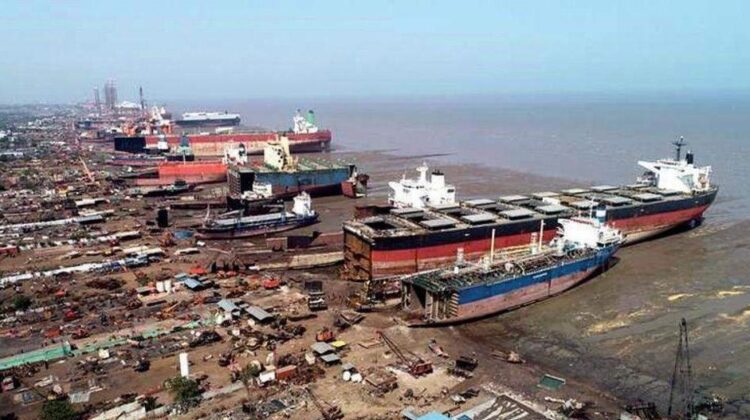 BHAVNAGAR : The Indian ship-breaking industry is sailing towards a 10 per cent revenue growth this fiscal on-year owing to improved availability of condemned vessels and higher rates for steel scrap, says a CRISIL report.

India’s ship breaking industry, the largest in the world at Alang in coastal south Gujarat with over 55 per cent share of the global market, is likely to boom in near future, thanks to the global slowdown in trade due to COVID-19.

The Indian ship-breaking industry is sailing towards a 10 per cent revenue growth this fiscal on-year owing to improved availability of condemned vessels and higher rates for steel scrap, says a CRISIL report. A plunge in global trade due to the COVID-19 pandemic weighed on sea freight, hurting viability of shippers and making more vessels available for dismantling at cheaper rates. Consequently, from the second quarter starting July 2020, there was a sharp rise in the number of vessels bought for breaking, compared with muted activity in the first quarter, says CRISIL.

“Indian ship-breakers are set to procure between 230 and 240 vessels, with a combined weight of over 1.9 million light displacement tonnage (LDT) this fiscal, compared with 214 vessels weighing 1.77 million LDT bought last fiscal. Meanwhile, steel scrap realisation has also improved to Rs 27,624 per tonne on average this fiscal compared with Rs 26,558 per tonne last fiscal. As a result, the industry’s revenue is likely to increase 10 per cent on-year,” said Rahul Guha, Director, CRISIL Ratings.

“Now large steel makers eye export markets and demand for secondary steel in India is picking up due to revived demand in infrastructure creation,” said Komalkant Sharma, Chairman and Managing Director of Leela Group of Companies in Bhavnagar, one of the largest recyclers of ships in India.

Due to poor infrastructure, environmental issues and a host of other issues like competition from yards at Gadani in Bangladesh and Chittagong in Pakistan and dumping of secondary steel into India from China had pushed the nearly four-decade old world’s largest ship graveyard at Alang into a crisis until four years ago. Alang has a capacity to scrap about 450 ships a year and a re-rollable steel capacity of 4.5 million tonnes per month with a turnover potential of over Rs 6,000-Rs 7,000 crore. At the 100 operational out of 160 yards in Alang, the number of ships scrapped in 2015 had plummeted to 196, whereas the same was 432 in 2012, thanks to the aftereffects of the then global financial crisis.

Soon Alang responded by conforming to the standards of Hong Kong International Convention for the Safe and Environmentally Sound Recycling of Ships. “We were the first to initiate SHE (Safety, Health and Environment) norms way back in 1990’s at Alang and now almost 95 per cent of the yards in Alang conform to the Hong Kong norms,” said Komalkant Sharma.