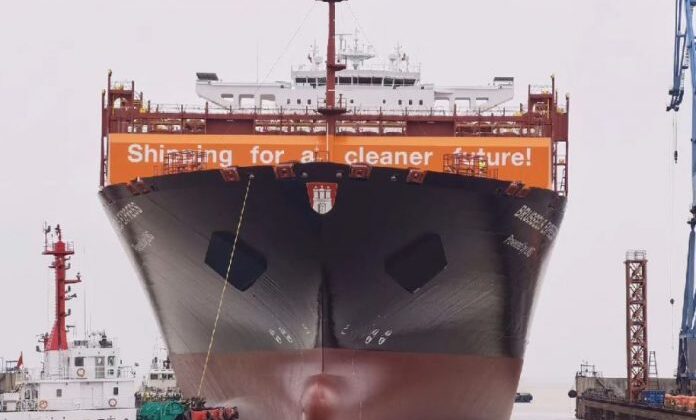 Hapag-Lloyd’s converted containership Brussels Express has recently completed its first LNG bunkering operation in the Dutch port of Rotterdam as part of the vessel’s maiden voyage from China.

The 15,000 TEU Brussels Express, previously known as Sajir, arrived in Rotterdam from China,

Hapag-Lloyd put back the vessel in service on its Europe-Far East trade on April 1.

The vessel now features a GTT 6,700-cbm LNG fuel tank and MAN dual-fuel propulsion. It will primarily sail on LNG with low-sulphur fuel oil as a backup.

“The vessel sailed on both LNG and during adjustment and repairs on regular low-sulphur fuel oil,” a Hapag-Lloyd spokeswoman told LNG Prime in emailed comments on Tuesday.

Commenting on the bunkering operation in Rotterdam, the spokeswoman said it was “rather a trial.”

“First commercial LNG bunkering will be on its second round voyage in Singapore,” she said.

Total costs for the containership conversion to LNG power reached about $35 million, according to Hapag-Lloyd.

This pilot project will help Hapag-Lloyd to decide on future LNG conversions but also paves the way for other owners looking to slash emissions and comply with more stringent IMO rules.

Besides this conversion, Hapag-Lloyd revealed in December