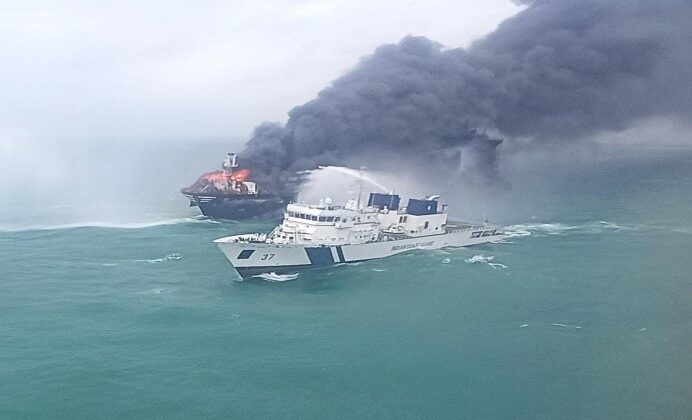 NEW DELHI : Efforts of Indian Coast Guard (ICG) are in full swing to control the fire onboard container vessel MV X-Press Pearl off Colombo, Sri Lanka. On the directives of Government of India following the request of Sri Lankan authorities, ICG swiftly deployed its assets to provide immediate assistance to MV X-Press Pearl. While ICG ship Vaibhav on maritime patrol was diverted immediately to reach the scene of incident on May 25, 2021, ICG ship Vajra, which was despatched from Tuticorin, arrived at the site in the wee hours of May 26, 2021. Presently, both the ships are fighting the intense fire onboard the vessel using external fire-fighting system braving the odds of rough weather.

ICG ship Samudra Prahari, a specialised Pollution Response (PR) vessel has also been despatched in PR configuration to augment the firefighting efforts and respond to oil spill, if occurred. ICG Dornier aircraft has undertaken air reconnaissance of the area. No oil spill has been reported.

The distressed vessel MV X-Press Pearl was carrying 1,486 containers with nitric acid and other hazardous IMDG code chemicals. The extreme fire, damage to containers and prevailing inclement weather has caused the vessel to tilt to starboard resulting in falling of containers overboard. Concerted joint efforts are in progress by two ICG ships and four tugs of Sri Lankan authorities to douse the fire.

The ICG has also kept its formations at Kochi, Chennai and Tuticorin on standby for immediate assistance towards Pollution Response. Continuous coordination is being maintained with the Sri Lankan Coast Guard and other Sri Lankan authorities for augmenting the overall response operations towards containing the fire onboard MV X-Press Pearl.