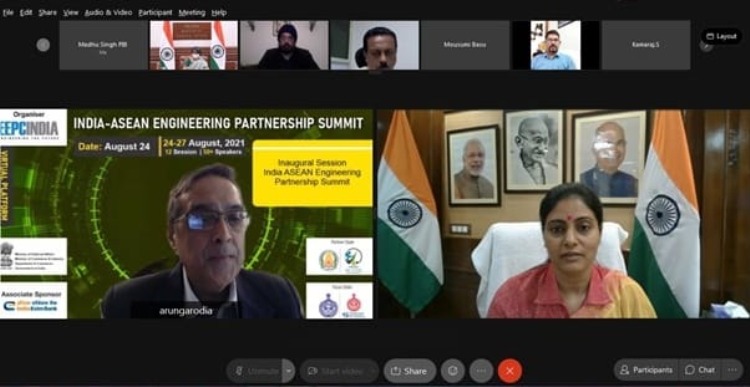 NEW DELHI : India is likely to record exports worth $46 billion to the ASEAN region, Minister of State of Commerce and Industry Anupriya Patel said on Tuesday. Patel further said that Prime Minister Shri Narendra Modi has set a target of USD 400 billion of merchandise exports for fiscal 2021-22

Patel inaugurated the “India-ASEAN Engineering Partnership Summit” organised by the Engineering Exports Promotion Council (EEPC) with support from the Ministry of External Affairs and the Department of Commerce.

Addressing the India-ASEAN Engineering Partnership Summit organised by EEPC India, she noted that as one of the largest destinations for Indian exports, the Association of South East Asian Nations will be an important region for India in meeting the global export target of $400 billion in financial year 2021-22.

“ASEAN, with over 15 per cent share in India’s global engineering shipments, is likely to be a key region to focus with a target of around $16 billion of exports for 2021-22,” she said.

India’s engineering exports to the world during the first four months (April-July) of fiscal 2021-22 was recorded at $35.3 billion and is expected to achieve the target set for fiscal 2021-22 at $105 billion.

The minister emphasised on the need for opening up new avenues of bilateral cooperation in order to enhance engineering trade and investments between India and the ASEAN.

“This will be instrumental in achieving the landmark export target set by the government both in terms of engineering as well as merchandise exports,” she said.

In his inaugural address, EEPC India Chairman Mahesh Desai said that with both ASEAN and India fast becoming prominent in the regional value chain on the global trade map, the time is apt for developing a well-structured bilateral relationship focusing on engineering goods.

“Going forward we need better integration between MSMEs from the two sides to tap the full potential of the bilateral relations. Nearly 60 per cent of our member-exporters come from the MSME sector,” he said.

India’s bilateral trade with ASEAN economies is expected to reach $300 billion by 2025, and it is the fifth largest trading partner for India following North America, EU, North-East Asia and GCC-West Asia.

“The role of engineering in taking the India-ASEAN bilateral relation to its full potential is instrumental as engineering contributes around one-fourth of merchandise exports for both sides,” Territorial Committee on Trade with ASEAN Chairman T.S. Bhasin said.