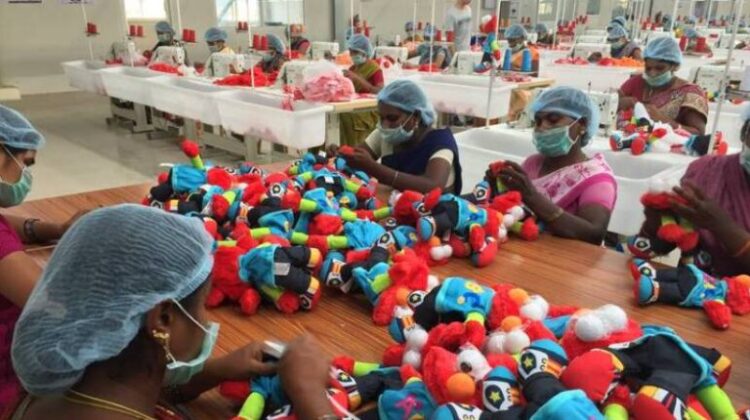 The next time your child plays with a remote controlled car, watch it, as it might well be manufactured in Karnataka.

Bhanapur, a remote village in Koppal district, is poised to attain star status with the Karnataka government the laying foundation stone for the country’s first toy manufacturing cluster in the village on Saturday.

Spread over 400 acres of land, the toy manufacturing cluster is expected to attract Rs 5,000 crore worth of investments and comes with the potential to generate direct employment for about 30,000 people.

The manufacturing campus is being promoted by Aequs SEZ Pvt Ltd in partnership with Karnataka. Bhanapur village in Koppal district, which has a population of less than 2,000 people, is located 365 km from Bengaluru.

After taking part in the foundation stone laying ceremony here, Chief Minister B.S. Yediyurappa said that the toy manufacturing cluster will contain over 100 units with a potential to generate 25,000 to 30,000 direct jobs and over one lakh jobs indirectly.

He added that the toy manufacturing industry is labour intensive and most of the workers are women, hence this toy cluster coming up at Koppal is a bold step towards empowering women.

“This is a momentous occasion as the Koppal toy cluster is the first in the country. The construction of the campus is expected to be completed by December this year. If it happens, we will invite Prime Minister Narendra Modi to inaugurate the toy cluster,” Yediyurappa said.

The CM said that preference would be given to women for employment in the manufacturing cluster in Koppal. “Women who are earning Rs 200 per day now will be able to earn Rs 600 per day. We will prioritise employment for women and Aequs has promised to train the locals in skill development,” he said.

Karnataka is the third-largest market for toys in India and is worth $159 million, 9.1 per cent of the national market. The industries department said the state has invited domestic and global toy makers in line with the Prime Minister’s vision of boosting toy manufacturing in India.

Karnataka is poised to emerge as a leading toy-making cluster due to the robust ecosystem the state has created to support toy-making industries, the industries department claimed.

“Koppal has a tradition of making traditional toys such as Kinnala. It is against this backdrop that we aim to make Koppal the country’s toy-making hub by promoting this art. I want to thank Aequs and other toy industries who have joined hands with the government initiative,” Industries Minister Jagadish Shettar said.