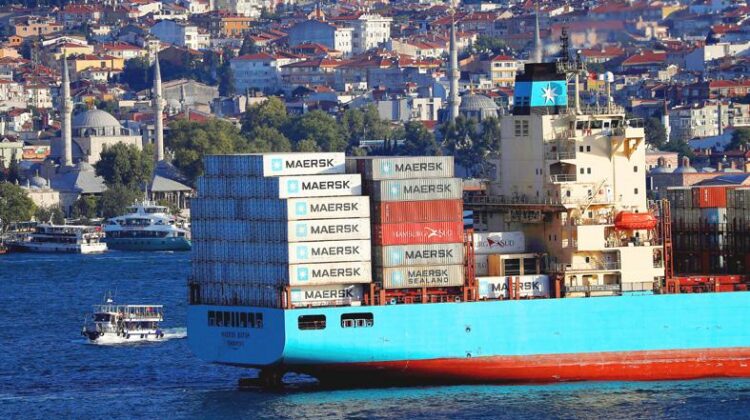 The world’s largest shipping line said in a statement yesterday that global ocean-based freight demand would grow 7 to 9 percent this year, up from a previous prediction of 6 to 8 percent growth.

Global container demand next year is projected to increase 2 to 4 percent, Maersk said.

Supply chains around the world have been thrown into chaos as shipping capacity has been unable to cope with a surge in demand for consumer goods.

Container lines such as Maersk have been the big winners as freight rates jumped to record levels with companies desperate to secure shipments.

Maersk reported revenue of US$16.6 billion for the third quarter, compared with US$16.08 billion seen by analysts surveyed by Bloomberg, while earnings before interest and taxes (EBIT) were US$5.86 billion compared with an estimated US$4.97 billion.

The company kept its financial guidance of an underlying EBIT of US$18 billion to US$19 billion for this year.

Maersk unveiled its earnings and guidance at a time when the world’s largest shipping hubs are facing elevated levels of congestion, as containers pile up at seaports from Singapore to Greece’s Piraeus.

Near Singapore , the backlog was 22 percent above normal, with 53 container ships anchored off the financial and cargo-transit hub, the highest count since Bloomberg News started tracking the data in April and topping the previous count of 45 waiting ships recorded on July 21, when Typhoon In-fa roared through Shanghai.

Typhoon Kompasu scattered ships out of Hong Kong and Shenzhen over two weeks ago and congestion rates off that port were still 10.4 percent higher than normal on Monday.

Backups were also seen in several other ports in Southeast Asia on Monday, with Port Klang in Malaysia reporting congestion rates at 14.5 percent above normal and Tanjung Pelepas at 29.9 percent more than usual. Jakarta’s container hub of Tanjung Priok was 6.7 percent above normal, while Manila’s was 6.5 percent higher.

On the other side of the Pacific, the dual ports of Los Angeles and Long Beach kept at least 79 vessels waiting off the coast of southern California early on Monday, as the US’ busiest import hub continues to work through a backlog around the clock.

In Europe, the Greek port of Piraeus saw an April-to-October high of 18 anchored ships waiting on Monday, as a line of vessels destined for the port stretched out into the Aegean Sea.