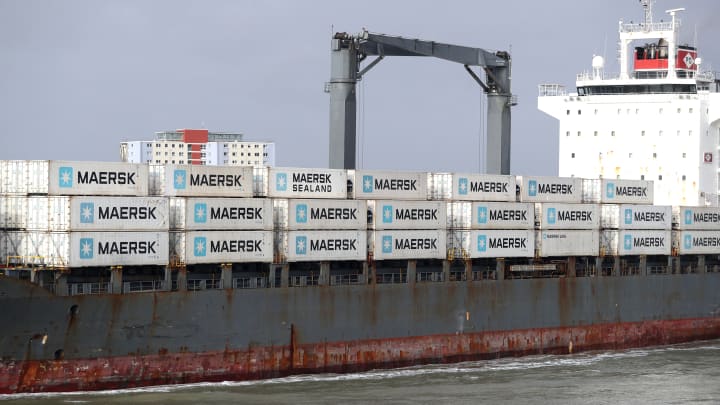 MUMBAI : With India’s exports showing strong momentum since the start of the year, the world’s largest shipping line, Maersk, repositioned as many as 2.15 lakh empty containers — moved empty boxes from a location that has surplus boxes to a deficit location — in the first 8 months of 2021 to support the country’s economic growth. Other shipping lines have also repositioned boxes, but this has not helped trade as a shortage of containers continues to cripple exporters.

“Maersk has repositioned empty containers like never before; 215,000 containers repositioned in the first 8 months of 2021 into India to support economic growth,” it said in its West and Central Asia Market Update to customers.

Further, the line has ‘in-fleeted’ 660,000 new containers since July 2020, which has partly helped overcome the shortage of containers and filling in for containers that are stuck in the ecosystem.

While domestic consumption in India remains low, exports remained strong, thereby increasing the need for supplying equipment (sea containers) to customers. In the first half of 2021, exports were 40 per cent higher than imports, which means that there are fewer containers available for exporters, Maersk said.

The purchasing managers’ index for August 2021 indicates continued growth in major economies like India (55.4), Saudi Arabia (54.1), and UAE (53.8). This is reflected in a strong rebound in volumes compared to last year, and lifted volumes being in line with 2019 figures.

Normal service levels continue despite a high equipment imbalance in the market caused by increased exports of retail and lifestyle segments to North America and Europe and increasing demand for agriculture exports post-monsoon. Concor has levied an imbalance surcharge to overcome equipment challenges in the Indian hinterland.

“While catering to all exports from our contractual customers and customers with two-ways commitment, we are additionally working to reduce dwell times for our equipment. So far, we have reduced the dwell time by up to 1.5 days, making more containers available for our customers,” Maersk said.

The amount of long-standing laden containers on-ground remain a bottleneck to creating sufficient availability of equipment for customers. Hence, any support customers can provide for faster return of equipment will positively contribute to the pool of containers being available, Maersk appealed.

Maersk and some other lines have also repositioned containers, but the ground reality is that boxes have been unavailable since the start of the year. Those who can afford to pay an ‘exorbitant’ rate can afford to take the boxes, say multiple sources.

“For three months, we have been waiting for boxes,” Dipak Shah, Director of the Coimbatore-based Crystal Tea and Chairman of the South India Tea Exporters’ Association, told BusinessLine. The situation has been really bad since the start of the year, he added.

On the global front, Maersk said that container demand remains strong and continues to run ahead of supply growth in Q2FY21. The combination of strong US consumption, higher throughput capacity, and re-opening in Europe is expected to drive average year-on-year container demand growth at around 6–8 per cent in 2021.