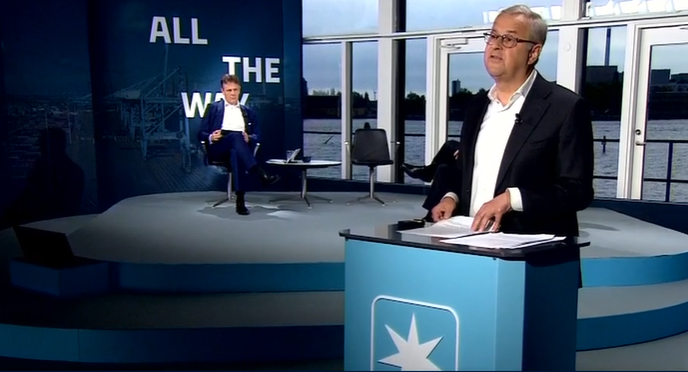 COPENHAGEN : Maersk on Tuesday suggested it is prepared to spend at least $1 billion on a logistics company takeover as the group progressively focuses on larger acquisitions to build scale in its end-to-end supply chain around a less cyclical ocean product.

“The thing with M&A (mergers and acquisitions) is you have to deal with what is actually on the table, but I would say prices starting with a ‘B’ is probably a good expectation over time,” Vincent Clerc, CEO of Maersk’s logistics and services division, said at the group’s capital markets day.

Maersk has allocated $1 billion in capital expenditures in 2021 and 2022 to the logistics and services division, which it regards as the growth engine of the group. So far, acquisitions made in the past three years since the carrier embarked on its integrated logistics path have been smaller, targeted takeovers, covering warehousing, distribution, and customs brokerage in the US and Europe. US customs brokerage Vandergrift was acquired in 2019, followed by US warehouse and distribution provider Performance Team in April 2020, and European customs services provider KGH in September 2020.

The progress of Maersk’s transformation from transport provider to integrated container logistics company was outlined by group executives in the virtual event, with the message to investors one of sustained profitability and rapid expansion of the end-to-end logistics offering, all revolving around reliable ocean services.

“Our ocean business is at the center of the new Maersk,” CEO Soren Skou told investors. “We will only succeed as a company long term if our ocean business can deliver stable and resilient earnings at scale.”

Maersk’s record first-quarter profits followed a highly positive 2020 annual financial result. Skou said given this strong starting point, he was confident the group could deliver an average return on investment of above 12 percent over the next two years. Maersk expects full-year earnings before interest and taxes (EBIT) for 2021 to be in the range of $9 billion to $11 billion, up from earlier guidance of $4.3 billion to $6.3 billion. Last year, Maersk reported full-year EBIT of $4.5 billion.

So confident is Maersk of its integrated strategy that the carrier has set its annual revenue growth target for the logistics and services business above 10 percent for the next five years as it expands the service offering.

“In logistics, we want to maintain EBIT levels above 6 percent while we grow revenue fast organically as well as inorganically,” said Skou.

“We are not yet done,” he added. “Over the next few years, our focus will be on stabilizing earnings in ocean at value-generating levels by continuing to strengthen the business and ensuring a soft landing from the currently elevated freight rate levels. We have a tailwind in the market, which will disappear with time.”

Johan Sigsgaard, head of ocean products at Maersk, also highlighted the “exceptional market,” and said when that ended, rates would settle above historical levels. He also said short-term rates were becoming less relevant to Maersk.

“In long-term and multiyear contracts, we have 1 million FEU signed on a time horizon of between two and five years, which means we can predict with a very high certainty both volume and rates for 2022,” he said. “It is no longer something that will be dependent on the short-term rates in that specific month of the contract negotiation.

“We can create a whole new set of value for customers that has nothing to do with the short-term fluctuation of rates,” he added. “We would like to take more of our very transactional volume and invest that in recurring partnership business.”

Enforceable contracts
A key requirement of the long-term contract business is the ability to offer two-way commitments. The lack of enforceability of ocean contracts has been a source of intense frustration to both carriers and shippers for many years. Carriers complain that up to 30 percent of booked containers never arrive, and shippers say their volume allocations are often cut or containers rolled at transshipment ports.

Sigsgaard said the product offerings by Maersk that covered 45 to 65 percent of ocean volume required two-way commitments, and also hinged on improved reliability by carriers.

“Essentially, we want to get to a position where we offer a time-bound promise to all shipments,” he said. “To do this we need to continue the work on improving reliability, but we need to change the focus slightly from schedule reliability to shipment-based reliability.

“Reliability is one of the key pain points and one of the key value opportunities,” he added. “One out of four containers is delayed, and typically a customer has a minimum of one week of safety stock because of this. If you ship flat screen TVs, this translates to $1,000 per container and this is the value we are looking at. Why that has not been addressed earlier is that no one has been prepared to take full ownership of the outcome, and that is what we will do with the new time-bound promises.”

Maersk made clear it had no plans to increase its fleet size beyond the current capacity of 4 million to 4.3 million TEU, despite ambitious plans to expand its end-to-end logistics services and grow ocean volume by 1 to 2 percent per year. Its 2M Alliance partner Mediterranean Shipping Co. is set to surpass Maersk as the largest carrier by capacity in 2021, when the Geneva-based carrier’s new ships come online.

One of Maersk’s top 200 customers on its integrated logistics platform is Puma, and CFO Michael Lammermann said the brand moved 42,200 TEU globally in 2020. Maersk is Puma’s largest ocean and origin logistics provider.

“It is our intention at Puma to double our business over the next five years, and in order to do that, we need a partner that is able to grow with us,” Lammermann said at the Maersk investor event.

Clerc said he was confident in Maersk’s ability to manage expected growth from strategic partners with the current fleet.

“If we one day get to a point where integrated logistics has so much scale that the 4.3 million TEU is a real cap on our growth, we can talk about it,” he said. “But for the time being, we have what we need to be successful in the coming years.”