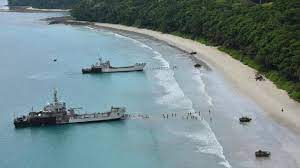 NEW DELHI : The Narendra Modi government’s ambitious plan for a transshipment terminal and other infrastructure projects on the Great Nicobar Island, piloted by the NITI Aayog, has cleared the first major hurdle in its way.

After a series of meetings in March and April, the 15-member Environment Appraisal Committee of the Ministry of Environment, Forest and Climate Change, has “recommended the proposal for grant of Terms of Reference.”

The plan proposes the construction of a transshipment terminal, a greenfield international airport, township and area development and a 450 megavolt amperes gas and solar based power plant on Great Nicobar, the southernmost and largest of the Nicobar Islands, and India’s southernmost territory.

Earlier, in a meeting on 17 and 18 March, the Expert Appraisal Committee had deferred the proposal as it needed additional information from the proponent.

According to the proposal, the International Container Transshipment Terminal will come up in the Galathea Bay, in the south eastern part of the Great Nicobar island, only 90 km away from the western end of the Malacca Strait, the shortest shipping route between the Indian Ocean and the South China Sea.

Transshipment involves offloading cargo from one ship and loading it onto another vessel to be carried to the final port of discharge.

Smaller feeder vessels bring cargo containers to the transshipment hub from the ports which large container ships can’t access due to depth restrictions — many of India’s major ports do not have deep draft required for such ships. Cargo containers are then unloaded from smaller ships and loaded onto larger ships at the transshipment terminal for transportation to final destinations.

In case of imports, large container ships bring cargo to the transshipment hubs like Colombo and Singapore, where it is unloaded and then loaded onto smaller ships, which can access ports with shallow draft.

Moving containers on large vessels is preferred as economies of scale kick in, lowering the cost of operations. It brings down freight rates for exporters and importers, improving their competitiveness.

As a result, Indian ports lose around $200 million of potential revenue each year.

“This translates into an estimated total loss of Rs 3,000-4,500 crore to economy (assuming an economic multiplier of 2-3x for ports). The loss is even higher if opportunity to handle cargo emerging from other countries in the region is considered,” a report on the Sagarmala portal reads.

Experts believe a significant portion of this container traffic could be transshipped through an Indian terminal in the Andaman and Nicobar Islands, if one is built. The terminal could also emerge as a major transshipment hub for other countries in the region, including Bangladesh and Myanmar.

A transshipment terminal in the Andaman and Nicobar Islands — the most technically and financially feasible location is Galathea Bay — will be closer to India’s eastern coast, Bangladesh and Myanmar than Singapore and Klang, which currently serve as major transshipment hubs in this region.

A 2015 report on the website of the Ministry of Ports, Shipping and Waterways says nearly 70 per cent of cargo from Bangladesh and Myanmar gets trans-shipped in Singapore. At least some of this could shift to the transshipment terminal in the Andaman and Nicobar Islands, if one comes up.

At transshipment terminal in the Galathea Bay will very close to the 200-kilometre-wide Six Degree Channel, through which a vast majority of international trade transiting the Strait of Malacca passes. The region also has potential for deep draft of 18 to 20 m, which means the terminal will be able to service large vessels.

Although the Environment Appraisal Committee has cleared the first hurdle, it has suggested that the government also explore alternate sites.

“The alternate sites than proposed Galathea Bay for International Container Transshipment Terminal should be explored through detailed studies with more focus on environmental and ecological impact of ICTT during construction and its operation, specially movements of vessels on turtles,” the Committee said.