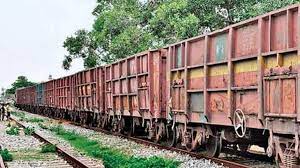 NEW DELHI : The government’s plans to monetise one-fifth of the two National Dedicated Freight Corridors (DFCs) has generated a lot of interest even though it makes up for only a small part of the recently launched National Monetisation Pipeline.

It has also generated controversy as the government continues to open up Indian Railways, one of India’s largest and most stable segments of the public sector, to more private participation.

A long time in the planning, the DFCs have been one of India’s largest infrastructure projects, continuously pushed by the Centre and Indian Railways for more than a decade now.

The government hopes to rake in a total of Rs, 20,178 crores by monetizing the two DFCs over a tentative two-year timeline beginning 2023-24. This is based on the June 2022, commissioning date currently planned for the entire route even though latest reports show work has progressed slowly.

The DFCs are only one item on a long list of other railway assets that have also been proposed monetization, including 400 railway stations, train operations of 90 passenger trains, 265 goods sheds, railway colonies and even the entire 741 kilometer stretch of the Konkan Railway.

However, they may elicit the most interest from private players given their broad geographic reach, far-reaching impact on logistics, manufacturing and trade and a stronger chance to generate quick, strong profits.

Why focus on DFCs

India’s over 3,300 km long planned national dedicated freight corridor has two routes. The 1,875 km Eastern Dedicated Freight Corridor runs between Ludhiana, Punjab and Dankuni, West Bengal near Kolkata, while the 1,506 km Western Dedicated Freight Corridor between Dadri, Uttar Pradesh and the JNPT port in Mumbai. The NITI Aayog has called for monetizing 673 kilometers of the entire length of the two DFCs over these two years.

Once completed, both corridors are expected to run only freight trains. As things stand, 650 km, or a shade over 20 percent of the total planned route, has been commissioned till now.

Primarily aimed at decongesting rail routes in the densely populated Gangetic valley (Uttar Pradesh, Bihar, West Bengal), the Eastern DFC envisages new rail infrastructure connecting India’s most populous states to the industrial hubs in western and northern India. As a result, passenger trains will not need to slow down or give way to relatively slower and heavier freight trains, as they do now.

The Western DFC aims to speed up movement of goods to and from India’s vast hinterland to major business hubs and ports in the Greater Mumbai region.

Once fully commissioned, it is assumed that DFCCIL will monetise ~673 km of track (either by way of grant of Carry Operate Transfer (COT) like concessions to private players or through InvIT transactions starting from FY 2024 onwards.

The government has suggested that assets of DFCs can be clubbed together by the Dedicated Freight Corridor Corporation of India, which is overseeing the project, into an InvIT and listed on the stock exchange to raise funds.

However, industry experts and analysts say the government has at its disposal a slew of other options that can be used to monetize the two mega corridors. The majority of them involve Carry Operate Transfer agreements.

Indian Railways can directly monetize coaches in trains by subletting them out to companies who can then charge tariffs to transport goods. Analysts say the railways can enter into revenue share agreements with companies for these coaches.

It can also monetize entire trains by leasing them out to private operators. These operators can then decide routes and timings for these trains and charge tariffs to transport goods. Similar revenue share agreements can be worked out with operators. However, the operators will be responsible for maintenance and operation of these trains.

One of the easiest options for the Railways would be to monetize the land around DFCs by leasing it out to companies that can set up infrastructure such as storage godowns on these land parcels and use or lease them out.

Finally, the Railways can give operating, construction and maintenance contracts to individual companies to extend the DFCs to their manufacturing plants in order to transport raw material or finished goods.

While the government hasn’t revealed much about its plans, analysts say all these options would have to be preceded by structural reforms in the way the Railways conducts their business.

“The Indian Railways has a bad history of working with private players, as the railways is often called upon to prioritize the interest of the nation at times, which compromises the Indian Railways profitability. When private players are involved they want to maximize operational efficiencies and profitability,” an analyst from Goldman Sachs said.

The lack of an independent regulator for the railway sector can also become a challenge when disputes between private operators and the Railways inevitably occur, he added.

Others pointed out that tariff competition with Indian Railways is not possible for private players. “Once the asset starts earning, there has to be monetisation. For that, the freight rate policy of the railway ministry has to be absolutely clear. Apart from safety and security there has to be clarity on tariffs for operational sections of the corridor if it has to be monetised,” Arindham Guha, Senior Analyst at Deloitte said.

The major issue of limited operational flexibility for private players will also haunt the monetization plans as majority of the DFCs will still be run by the Indian Railways. “The Indian Railways is a monopoly and is allowing entry of the private sector in a very limited way – track, rolling stock and manpower will be its own. This restricts the role private parties can play,” an industry participant said.

Private players have mentioned concerns over the threshold of exclusivity of operations, or the time during which other trains will not run on their paths and nearby routes.