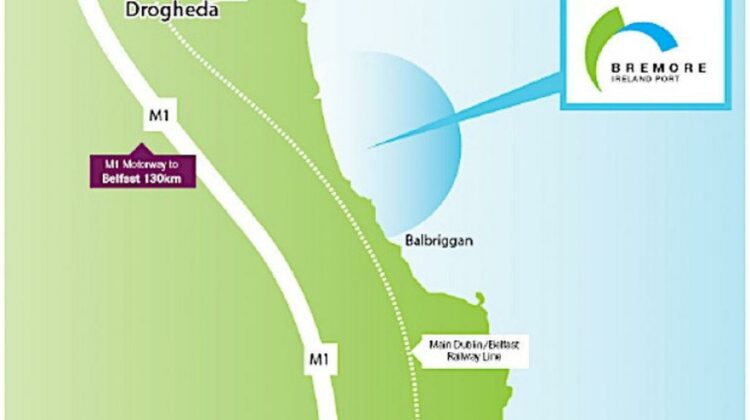 Cllr Tom O’Leary (FG) told the Fingal IndependentL: “I have been informed that the tender process has commenced to move the plan for a new Deepwater port at Bremore Co Meath to the next stage .

“The port is on the Fingal County Council border, very close to Balbriggan. .

“It’s a circa €2 Billion Investment which has the capacity to generate many jobs and economic activity in the Dublin Belfast Economic corridor, including Meath and Fingal.”

The project is a partnership or Designated Activities Company (DAC) between Drogheda Port Company, and Ronan Group Real Estate (RGRE).

Cllr O’Leary said: ‘I have submitted two motions to Phase 1 of the Fingal Development Plan 2023-2029 in anticipation of progress on the Bremore Port Project.#

“I have had recent discussions with Statkraft a Norwegian Company and Europe’s largest Generator of renewable energy. Statkraft plan to construct 30 to 36 Wind Turbines (in three clusters) off the Coast of Louth, Meath , Fingal .

“The turbines will supply enough sustainable green energy for 500,000 homes.

“Bremore Port will act as landing site, assembly point and support centre for the turbines that will power the off-shore wind farms being developed in the Irish Sea.”

Cllr O’Leary said: “The port area will be major Irish hub for green innovation become a hub for the production and distribution of ‘green hydrogen’ – a ground-breaking zero-carbon energy source that has the potential to contribute significantly to Ireland’s climate action goals and power needs.

This is one of the biggest infrastructural developments in the Fingal Meath region and will require close cooperation of both counties.

It’s important that there is comprehensive communication with local communities and strategic planning of transport links to service this large regional port project.”

Cllr O’Leary’s first motion to the new Fingal County Development Plan, concerning the port, states: “That Fingal County Council resolves to work closely and collaborate with our neighbours Meath County Council and make provision in the Fingal Development Plan 2023-2029 for a Deepwater port in the environs of Bremore, most likely on lands in the Meath County Council area, on the Fingal border to promote, employment and enterprise opportunities in Fingal along with the appropriate infrastructure to service a deep-water port.”

Cllr O’Leary’s second motion states: “That Fingal County Council,, taking into account Fingal’s membership of the eight councils in the Dublin Economic Corridor area and the stated policy to develop businesses, enterprise and co-operation along the Dublin Economic Corridor, actively supports and promotes the Development of Business Parks in the vicinity and or adjacent to the M1 Motorway.”

The latest tender for the project seeks a “single party framework agreement to provide planning consultancy services for the development of a new port on the north of Bremore Head”.