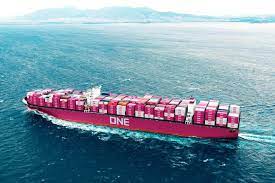 ONE posted a profit of $4.2bn for its second quarter, for an H1 result of $6.76bn, but said although cargo demand was still strong, it expected some “volume decrease” around Chinese New Year and anticipates $5bn of profit for H2.

Apart from a quarter-on-quarter 65% hike in bunker costs, to $509 per ton, ONE said its operational costs had increased “due to faster vessel speeds”.

Interestingly, ONE’s average rate for the quarter was almost exactly the same as OOCL’s $2,383 per teu, revealed in the Hong Kong-based carrier’s operational update.

The average rates may seem low, given the high market rates on some trades, however they reflect the comparatively lower rates on backhaul, intra-Asia and other less-lucrative routes, along with the extremely high-earning Asia to Europe and Asia to North American routes.

Carriers are gradually completing their relatively low-rated contract commitments and replacing them with much higher and longer-term agreements, which, together with a short-term business that remains highly elevated, is working straight to their bottom line results.

It follows that even the recently upgraded $150bn 2021 profit prediction by maritime consultant Drewry could yet prove conservative.

At 32% of its business, the transpacific remains ONE’s dominant trade, followed by Asia-Europe, at 24%, and intra-Asia, at 21%,

In its second quarter, ONE carried 649,000 teu on the headhaul Asia-North America trade, 15% less than in the previous year, which it attributed to port congestion at the Los Angeles and Long Beach hubs.

In contrast, on its Asia-Europe headhaul trade, the carrier grew its liftings by 6%, to 443,000 teu.

“Like our industry competitors, we could have carried even more freight had we not been forced to blank so many Asia sailings, due to gaps in the schedule resulting from heavily delayed vessels returning from overseas destinations,” said ONE CEO Jeremy Nixon.

“As things stand, we see no major improvement in the current situation, particularly in North America,” he added.

And the dearth of open containerships on the charter market is inhibiting the Japanese line’s growth potential, it says.

“The charter market for container vessels is sold out, and so the ability to augment our core fleet in the immediate short-term is constrained,” said Mr Nixon.