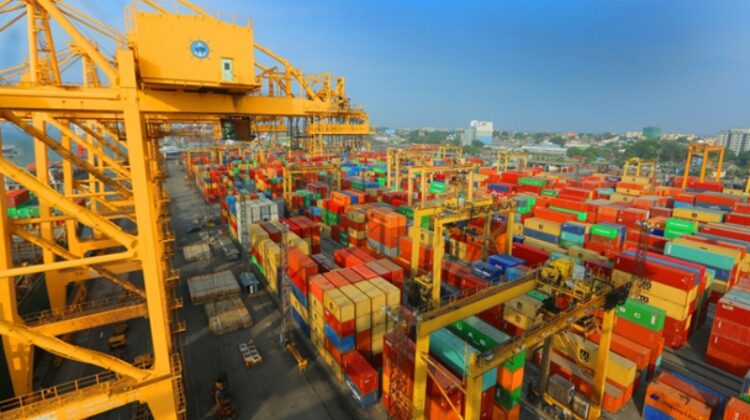 The construction of the phase 5 of the Jaya Container Terminal (JCT) of Sri Lanka Ports Authority (SLPA) commenced yesterday.

The event was held with the initiative of Minister of Ports and Shipping – Rohitha Abeygunawardena, and with the participation of the State Minister of Warehouse Facilities, Container Yards, Port Supply Facilities and Boats and Shipping Industry Development Jayantha Samaraweera and the Chairman of the Sri Lanka Ports Authority (SLPA)  – General Daya Ratnayake.

Development of Jaya Container Terminal (JCT)  commenced in March 1983. Accordingly, the first phase of the terminal was opened in 1985, the second phase in 1987, the third phase in 1995 and the fourth phase in 1996.

Commenting on the occasion, the Chairman of Sri Lanka Ports Authority (SLPA)  –  General Daya Ratnayake said that the golden era  of the port and shipping industry in Sri Lanka existed from 2005 to 2015 would  re-commence with the implementation of  construction of phase   5 of the SLPA’s Jaya Container Terminal (JCT).

State Minister of Warehouse Facilities, Container Yards, Port Supply Facilities and Boats and Shipping Industry Development – Jayantha Samaraweera speaking at the occasion said that the  era of loss caused by the loss  of Port of Hambantota had ended and a new era of port development had begun with the implementation of phase 5 of JCT.

Commenting on the  occasion, Minister of Ports and Shipping –  Rohitha Abeygunawardena said that the Jaya Container Terminal’s (JCT) Phase 05 was  a project initiated by the previous government and  also stated that it was his responsibility to act and implement  as the Minister in charge despite criticizing such work. “Although the construction of phase 5 of the  terminal was supposed to be completed  first, the previous government had stopped the constructions by giving priority to the import of Gantry  cranes. However, the construction of the phase 5 of  the terminal has commenced today due to the arrival of the imported cranes,” he said.

He added that despite the protests over the construction of the breakwater for the Colombo South Port and the construction of the Colombo International Terminal (CICT),  none of those new projects would have been launched at present,  if the breakwater had not been constructed. “Also, the Port of Colombo will be a more efficient port in the future with complete  construction and commissioning of the East Container  Terminal (ECT) as well as the West Container  Terminal(WCT).

These  will lead Sri Lanka  becoming the maritime hub of Asia,” the Minister said.

The  Minister further stated that he had  the  responsibility as the Minister in charge, to attract foreign exchange into the country by developing the Port of Colombo as an economic hub taking timely decisions, realizing the “Vision of Prosperity” of His Excellency the President Gotabaya Rajapaksa.

Phase 05 of the Jaya Container Terminal (JCT), which commenced on 01st December 2020, is scheduled to be completed by July 2022. The total value of this project is US $ 32 million. The consultancy for the project is to be provided by the Contract and Planning Engineering Division of the Sri Lanka Ports Authority (SLPA). The construction company for the project is China Harbor Engineering Company Ltd (CHEC).

The  construction of Phase 05 of the Jaya Container Terminal (JCT)  will  add  a number of advantages to operations of Sri Lanka Ports Authority (SLPA) and the Port of Colombo.  The  length of the phase 5 of the terminal will avoid obstacles at the edge JCT phase 4  when providing anchorage facilities for ships currently with 366 meters in length. Accordingly, the additional length  of 120 meters that would be added by the construction of phase 5 of the terminal will result in an efficient and effective operation of vessels at the JCT. With the completion of constructions,  a new yard area of ​​40,000 square meters, in other words about 04 hectares will also be added to the Jaya Container Terminal (JCT).

ONE introduces new service to connect India and UAE

ONE Marine Safety and Quality Campaign 2022 Award held in Singapore